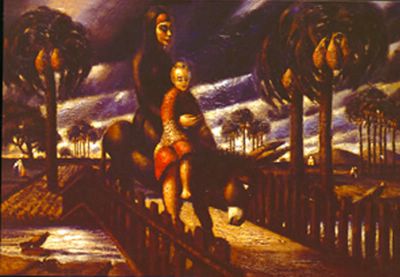 When I saw the pictures of assaulted women last week, I thought of the thousands of other abused women whose stories we don’t know, the thousands of broken families, fatherless children, impoverished households, and heartbroken grandparents whose grief we can never console. All of it courtesy of the predatory police forces of Hosni Mubarak’s regime, whose raison d’être has become the literal violation, maiming, and killing of ordinary citizens. As we don black today to condemn the crimes of 25th May, let’s also remember the crimes of Mays past. Remember the fallen mother of four who died at the hands of police in March: Sarando’s Nafisa al-Marakbi, 38, whose spirit expired shortly after her body was violated by criminal police agents.


It is a testament to the resounding failure of the Mubarak regime that the one day it set aside to trumpet its democratic credentials to the world instead turned into a domestic and international scandal, a fadiha par excellence. The referendum will forever be remembered as the day the regime hit rock bottom, as novelist Alaa’ al-Aswani writes in al-Araby. The deliberate and methodical targeting of women demonstrators under the gaze of policemen, detectives (such as they are), and even more high-ranking employees of the Ministry of the Interior was dismissed as “exaggerated” by the president’s spokesman. By that warped logic, more women and men had to be assaulted before the powers that be deem the event serious enough to warrant mention.

And yet, and yet, it behooves us to remember that the 25th May scandals were not unprecedented.

Recall the March 2003 anti-Iraq war protests, when a supremely nervous regime faced off with a spontaneously outraged and mobilised society. The events of that spring now appear eerily like a dry-run for today’s upheaval. Women protestors were dragged on the street by the hair, beaten, and hauled off in paddy wagons where they were threatened with rape by Interior’s officers. Members of parliament Hamdeen Sabahy and Muhammad Farid Hasanein were viciously beaten and detained. Journalist Ibrahim al-Sahari was snatched from his bed in the dead of night. Seasoned (and aging) activists Ashraf Bayoumi and Abdel Mohsen Hammouda were roughed up and detained, despite peacefully demonstrating at Sayed Ayesha square with permissive court ruling in hand. It was as if the regime was saying: nothing is sacred. Not the sanctity of women’s bodies, nor parliamentary immunity, nor the prestige of the fourth estate, nor the shield of old age. It was but a short leap to the events of last week (though let’s not forget the November 2004 attack on al-Araby editor Abdel Halim Qandil in the interim).

Back then too, society fought back, sending defiant messages to “Interior’s floggers” of “we are not afraid.” Putatively apolitical wives sent out eloquent open letters ennobled by grief and courage. Human rights lawyers motioned to sue Mubarak and his Interior Minister in the courts. And even our hapless parliamentary representatives mustered enough outrage to condemn the assault on their institutional if not political colleagues. The street was ablaze. Hosni Mubarak’s ridiculously large poster was torn off the NDP headquarters; faculty stirred alongside wrathful students on campus, the unions of the professions played their historically conditioned roles, and the seeds of bitterness and anger were sown into the souls of ordinary citizens who felt helpless and ashamed at their government’s acquiescence to American writ. Those resonant anti-Mubarak slogans were coined that spring, when the first, tiny anti-tawrith demo made its voice heard in front of the People’s Assembly.

If we want to be honest with ourselves, then we cannot claim that the state-sanctioned targeting of women on “black Wednesday” 2005 was unprecedented. The Mubarak regime has a long record of distinction on that front. How many relatives of Islamist detainees were beaten, raped, impoverished, and otherwise immiserated by security forces since 1992? If conservative estimates put the current number of detainees in prisons without trial at 16,000, I’m sure you can appreciate the magnitude. It did not all begin with the Taba bombings of last October, either, those were but the most visible tip of a huge, submerged and horrifying iceberg.

Novelist Alaa’ al-Aswani helped to mainstream the issue of state torture of Islamist detainees in his novel ‘Imarat Yacoubian. A prior and even more harrowing and powerful work is Magdi al-Batran’s fictionalised account of his tour of duty in Egypt’s south, Yawmiyyat Dhabit fi-l-Aryaf (Diary of a Police Officer in the Countryside, 1998). With a tortured conscience and a matter-of-fact style, al-Batran reveals the unspeakable state abuses against Egypt’s most vulnerable citizens in the mid-1990s.

I spent a somber afternoon reading through the painstaking reports of the EOHR and Muhammad Zarie's Human Rights Association for the Assistance of Prisoners (HRAAP), with their damning and heartrending details of systematised state violence against men, women, children, and the elderly, violence that now routinely ends in loss of life. Please read what has become of us at the hands of this predatory regime. And especially, read the missives of parents of detainees to the right honourable Interior Minister, appealing to his fatherly instincts when all else fails, hoping against hope that his heart may perchance be as tender as their own. It is not for nothing that the EOHR a few years ago dedicated Mother’s Day to the thousands of mothers of perpetually detained sons.

Out of the dozens of tragic stories in the rights groups’ reports, two haunt me. The mother of detainee Zaki al-Sayed Suleiman, 25, and held in Fayyoum prison, recounts:

Last Eid, good Samaritans told me that the government would allow the families of detainees in Fayyoum prison to visit on the first day of Eid. I was so happy, I haven’t seen my son in years, and I bought everything I could for him. After waiting for four hours in front of the prison gates, they told me visits weren’t allowed for political prisoners. I said to them, aren’t they human beings too? And I cried and pleaded with them to let me see my son, that I only wanted to greet him for the Eid, but they refused (HRAAP, “Kingdom of Silence: For Security Purposes, Four Prisons Closed,” 1999).

I am 60 years old. My only son was arrested on November 13, 1996; before his arrest he worked as a teacher. Since his arrest, I live alone in the house in Naga’ Zureiq village, Markaz al-Badari, Assiut governorate. I asked after him and learned that he was in Fayyoum prison. I tried to visit him and learned that visits are forbidden to Fayyoum prison. Since the date of his arrest, I have not seen him and he has not attended the wedding of his only sister. I sent several complaints to the President of the Republic, the Interior Minister, the Attorney General, the speaker of the People’s Assembly and the President of the Shura Council and the Secretary-General of the National Democratic Party asking for the release of my son and only supporter, as well as permitting me to visit him…since no convictions were issued against him and he has obtained several orders of release, or granting me power of attorney so I can access his salary from the Ministry of Education, and I haven’t received a response until now (HRAAP, “Kingdom of Silence: For Security Purposes, Four Prisons Closed,” 1999)

I am forever grateful to the staff of these human rights organisations for collating these materials, so that at the very least, we may never forget. And today, I am grateful to the indefatigable and proud Manal and Alaa for culling a valuable 47-page documentary record of the abuses during the 25th May referendum (PDF here).

When I saw the pictures of assaulted women last week, I thought of the thousands of other abused women whose stories we don’t know, the thousands of broken families, fatherless children, impoverished households, and heartbroken grandparents whose grief we can never console. All of it courtesy of the predatory police forces of Hosni Mubarak’s regime, whose raison d’être has become the literal violation, maiming, and killing of ordinary citizens. As we don black today to condemn the crimes of 25th May, let’s also remember the crimes of Mays past. Remember the fallen mother of four who died at the hands of police in March: Sarando’s Nafisa al-Marakbi, 38, whose spirit expired shortly after her body was violated by criminal police agents.

A day in July 1997, 10 am. The pleasantly draughty corridors of Detainees’ Affairs, tucked away discreetly at the back of the Shari’ al-Gala’ court complex. A hole-in-the-wall makeshift “cafeteria” dispenses scalding tea and packets of brittle butter biscuits with the rippled edges. Rural families sit huddled on the floor surrounded by their humble belongings, looking down wearily with the gait of weeping willows. Surly clerks gossip and remain impervious to the unlettered supplicants. A dark-skinned woman clad in black with a round, kind maternal face moves from office to office in search of the whereabouts of her imprisoned son, who is constantly transferred from prison to prison by authorities without notifying his family. “First they told me Wadi el-Gedeed, then Fayyoum, then Tora; I make the trip up from the south every week and I still haven’t seen him, he’s been inside for five years.” She stops briefly and allows herself the tears she’s held back for so long. Then she collects herself, wipes the tears with the edge of her black tarha, shrugs off the offer of tea, and firmly walks the steps traced by the prophet Job.