On the same day that Egyptian police shot dead at least 74 Muslim Brother demonstrators and wounded scores, the Interior Ministry released what it called its first animated short for children. A little boy and his grandfather (a retired police officer) sit on a couch in a spare living room, watching television footage of an earthquake in Turkey. The boy asks his grandfather, “Geddo geddo, what’s an earthquake?” The grandfather recites the geological definition of an earthquake and sagely schools the child in the proper safety procedures in such an event. To the awe of his grandson, he highlights the heroic role of the civil defense forces, “who will sacrifice their lives for us.” The video ends with the message, “We seek to upgrade the thinking of the Ministry of Interior and to provide excellent services, so please cooperate with us.”

A Litany of State Violence

A non-exhaustive list of organized violence by military and/or police forces against unarmed citizens since the January 25th revolution. The list doesn’t include countless episodes of deliberate police inaction in the face of deadly citizen-on-citizen violence, most notably the March 2011 Manshiyyat Nasser Christian-Muslim clashes (15 dead, 114 injured), the February 2012 Port Said soccer deaths (74 dead, 1,000 injured), the December 5, 2012 Muslim Brothers’ break-up of the Ittehadeyya Palace sit-in (10 deaths), and the June 2013 lynching of four Shi’a Muslims and injury of eight.


It’s a small detail of great consequence. On July 3, members of the presidential guard stepped away and let Dr. Mohamed Morsi and his aides be arrested by army commandos. If men with guns and tanks can simply arrest an elected president, then what’s to keep them from doing it again and again?

The horrible precedent this sets is buried under the partisan fury for and against the Muslim Brothers. Haters of the MB apparently see nothing wrong with the military summarily detaining the first elected national leader in Egyptian history. Boosters of the MB are so caught up in their own injury that they’re not pausing to wonder why a great many people feel relief and even satisfaction at the demise of the Morsi presidency.

If there were lingering doubts that the military pounced on the June 30 protests to re-establish its political supremacy, Gen. El-Sisi’s Sunday address removed a lot of them. Using convoluted language and tortured logic, the speech’s organizing premise is that the “people summoned the armed forces for the mission of balancing the tipped scale and restoring diverted goals.”

“The people” are mentioned 28 times, but their sovereignty is not once affirmed. What’s emphasized is that the armed forces are the unmoved mover, guarding the country’s politics, not just its borders. 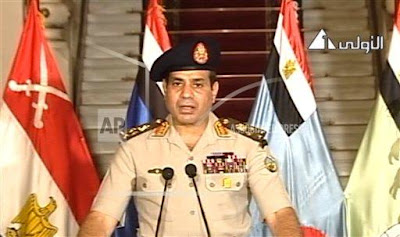 I understand the outrage of honest citizens who went out to protest against Mohamed Morsi on June 30 only to have their efforts branded a coup. When you’re in the middle of a crowd of boisterous humanity that stretches farther than the eye can see, nothing exists outside of that overwhelming reality. The feeling of mutual recognition and collective empowerment erases all context and constraints. As well it should. You don’t go to a protest to think carefully or make necessary distinctions. But when you exit the protest and survey the big picture, you do have to face inconvenient facts.

One such fact is that the protests were unscrupulously appropriated and packaged for ends I’m pretty sure many protesters find abhorrent. A genuine popular protest and a military coup aren’t mutually exclusive. The massive protests of June 30 came in conjunction with a much larger scheme that began very soon after Morsi took office. This long term project by entrenched state elites seeks more than simply ejecting the Muslim Brothers from power, although that’s a highly prized outcome.