To be Poor in Egypt 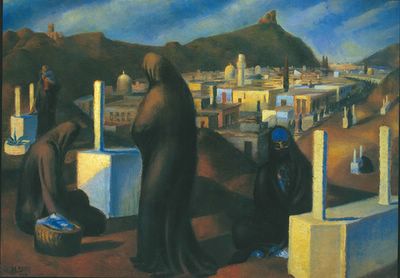 Apropos of this bankrupt regime’s criminal and disgusting use of poor Egyptians to assemble and yell pro-Mubarak chants:

al-Araby’s inimitable Gamal Fahmy has a heartbreaking rumination on these folk this week, ending his column with a tragic, painful image only a sentient writer of his sagacity can observe and retell.

I don’t doubt that many others were pained and outraged last week by the busing in of poor Egyptians to shout stock slogans against Kifaya and “for” Hosni Mubarak: “Ya Mubarak doos doos, ehna ma’ak min gheir fuloos!” (Oh Mubarak step on them step on them, we’re with you without any money!) Gynecologist and Gamal Mubarak crony Hossam Badrawi reportedly dispatched his henchmen to collect idling men at ahwas and poor women from shantytowns and deposit them across the latest Kifaya demonstration. They lure them with a promise of a fuul sandwich and £E20 that whittles down to £E16 after the go-between takes his cut (read Gamal Fahmy on this poignant detail).

Cairo’s poor take center stage only when there’s an armed attack or the regime needs last minute constituents to parade in front of the world. Then they’re pulled out of their lairs of invisibility and dragged in front of the cameras for “social experts” to dissect. Witness the sick voyeurism with which journalists and “poverty experts” descended on Shubra al-Khayma after the Sayyeda Zeinab and Tahrir bombings, wringing their hands at the poor’s lack of privacy, paved roads, water, education, nutrition, what have you. What colossal levels of willful ignorance, atrocious taste, and abuse leads ostensibly enlightened Egyptians to pretend that they agonise and care about the poor in their hovels? It makes me physically ill to hear respectable “social scientists” pontificate about a culture of poverty and “obscurantist extremism” that feeds conservatism and social violence. Everyone wanted to advance his or her own brilliant theory, everyone scrambled to test the latest “explanations” parroted slavishly from whatever fourth-rate textbook they could get their hands on, everyone competed to violate these people once again in the carnival of commentary that erupted after the bombings.

As for the regime, there is nothing more sickening than Suzanne Mubarak’s “inauguration” of a community center in Ezbet el-Walda in Helwan last week, an event redolent of Marie Antoinette’s games of dress-up and let’s-pretend-to-be-poor. That Empress was at least open about her blithe “let them eat cake” attitude, but Suzanne Mubarak seriously aspires to appropriate the rights of citizenship as a token of her personal benediction. How revolting the sight of the president’s wife surrounded by her servile officials and latest posse of ladies who lunch as they gaze down superciliously at one of the most impoverished corners of Cairo, venal state television cameras there to capture it all and bring us the good tidings on the 6 o’clock news.

How deeply painful the disingenuous, incongruous sight of kindly, modest Egyptian mothers forced to hold aloft posters of Hosni Mubarak and shout ugly, belligerent slogans alien to their sweet natures and reflexive kindness. Just when we think it’s impossible for this regime to stoop lower in its cynical manipulation and abuse of all citizens, but especially the poor, it reveals a diabolical knack for grabbing at anything to ensure its own miserable survival. Most tragic of all is the double exploitation of Egypt’s poor: those garbed in black and armed with truncheons encircling those dressed in rags and armed with “Yes to Mubarak” posters and cheap drums. The wretched stand shoulder to shoulder with the duped, separated by years of fear, pauperisation, and the systematic theft of their basic human dignity.

But Hosni Mubarak says, “Don’t ever believe that anyone goes to bed without supper in Egypt, with the difference being that one person eats meat and another eats fuul. Personally I like to eat a fuul sandwich. Egypt is the land of peace and prosperity and no one goes hungry here.”

To erase from my mind the false sight of poor Egyptian women carrying Mubarak posters or forced to pay deference to his wife, I think of them as I see them: at the mouth of Sharia Qasr al-Aini selling tissues and plastic combs; in Midan al-Gami’ chopping carrots and shelling peas to sell to pampered housewives; in the Metro selling trinkets and hairpins; in the markets hawking gebna arish and legumes; outside the Sa’d Zaghlul Metro station good-naturedly haggling with homebound government clerks over bunches of sun-wilted dill and knobby potatoes; in the miserable latrine of Alexandria’s Mahattet Masr train station, permanently hunched over to wipe the floor with an ancient, drenched rag; outside Metro Market offering up clumps of baladi mint and juicy lemons; at the corner of Sharia al-Kneesa in Alexandria selling newspapers and magazines; wandering the draughty corridors of Detainees’ Affairs in the courthouse on Sharia al-Gala’, seeking the whereabouts of their imprisoned sons; clutching their babies as they try to cross the deadly Autostrade near Manshiyyet Nasser; making the long trek from al-Marg and el-Gabal el-Asfar to clean the homes of the upwardly mobile; and stealing a few moments in the refuge of al-Azhar, quietly murmuring words of supplication before walking back out into a chaotic world indifferent to their sufferings. Listen closely to their anodyne prayers, before they waft up to the ears of angels.