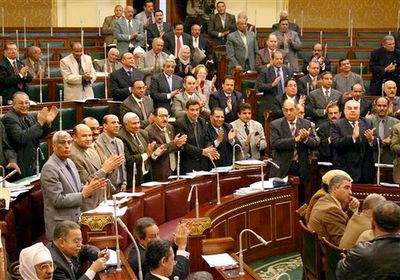 Never one to disappoint, the People’s Assembly (Magles al-Shaab) just released its delicious report on the rules governing the September presidential election. Today’s al-Ahram ever-so helpfully printed the full text of the report, which I’ve just finished digesting, with a good cup of tea. The bottom line: “the majesty and particularity of the position of president of the republic” means that not just anyone can apply. No indeed. In fact, presidential hopefuls must garner the endorsement of 300 members of parliament and local councils. In addition, political parties in existence for at least 5 years, and with at least 5% representation in parliament (upper and lower house), may nominate for the presidency one member of their politburo. (Correction: this year, official opposition parties are exempt from the 5% threshold requirement, which will be in effect for the 2011 election. Thanks Ramy).

The report makes for instructive reading, a sobering glimpse into the minds of Egypt’s legal tailors (tarziyyat al-qawanin), those highly remunerated adjuncts of the Egyptian government who develop the requisite statutory garb for all manner of unsavory practices. Consider their daunting task: the president announces on 26 February that Egyptians will finally directly elect their president. How to wrap this in democracyspeak while emptying it of democracycontent? Don’t belittle this delicate task, people, it requires considerable acuity and presence of mind to pull it off. Well-practiced in prevarication, sleight of hand, and subterfuge, the tailors read the president’s signals and translate it into action. The result: long disquisitions about the “majesty” and untouchability of the presidential vocation; specious arguments about the salutary effects of disabling conditions; and faux-earnest avowals of how carefully and painstakingly Magles al-Shaab worked to come up with these conditions.

We are told: the logic of requiring 300 endorsements lies in the fact that the endorsers “are elected at the national and local levels and enjoy popular representation.” Not only that: “in any future local elections, when the voter feels that whomever he grants his vote to serve in the municipal council will possess a binding opinion on endorsing a presidential candidate, [the parliamentary committee setting the rules] predicts that voter turnout at future local elections will reach an unprecedentedly high rate in the history of local administration in Egypt.” Brilliance. Not only does the clever committee ensure that knaves and ne’er do wells are kept at arm’s length from the prize of the presidency, it also energizes voter interest in municipal elections. Why didn’t I think of that?

As for generously allowing what are generously dubbed “opposition parties” to play, well obviously that is “to deepen the democratic march and support party pluralism.” How could I miss that? And as for those annoying courts and their annoying reports invalidating election results and confirming fraud and rigging, why bother? The clever parliamentary committee sets up a smart “Presidential Elections Commission” chaired by the president of the Supreme Constitutional Court (thoroughly cowed), a bunch of judges (sure to be handpicked), and “five public figures who have a reputation for neutrality,” three of whom are picked by the People’s Assembly and two by the Shura Council (surprise surprise). And here’s the rub: no institution or individual on earth can overrule the findings of the commission or even interpret its decisions. In fact, the commission has complete monopoly over the presidential election process, including handling complaints and refereeing the contestation of results. So those nosy judges constantly babbling about electoral irregularities and their right to oversee everything can just pipe down, thank you very much.

Meaty issues of campaign financing are left vague, however, to be determined by a special presidential elections law about which the report is magically terse. Where have we seen this before? Oh right, the 1971 constitution, full of sublime-sounding rights and freedoms but always “determined by law”, the indispensable shibboleth of crafty legal tailors since the French Constitution of 1793.

The real issues receive lots of attention, of course, such as the breakdown of the 300 endorsers: no less than 65 elected members of the People’s Assembly, 25 from the Shura Council, 10 from the local councils of at least 14 provinces, “so we can ensure that the candidate has a presence and weight at the national level.” The remainder of endorsers is culled from these three institutions combined. Voting for president will be on one day only, despite protests that there aren’t enough judges to supervise all polling stations.

Electoral engineering and legal tailoring have a long history in Egypt; parliament’s report is only the latest instance. So it’s absolutely no surprise that September’s election will have all the makings of an unfunny farce, a contrived spectacle where the president sets all the rules of the game, handpicks his opponents, and then asks us to play along and clap slavishly at our burgeoning democracy. In this sense, it matters little what the president and his tailors say. Much more significant are what the Egyptian people say.

The ever-obliging, ever-fanciful Tagammu’ put forward its senile patriarch Khaled Mohieddine to run against Mubarak (no wonder respectable leftists are quietly leaving this ridiculous party in droves). Dr. Nawal el-Saadawi indicated to Reuters that she’s charging full steam ahead with her well-laid plans to become Egypt’s next president. Saner players and commentators are refusing to play the game, however. Salah Eissa’s terse send-up in al-Wafd is refreshing. Ahmed Sayed al-Naggar’s acid observation is truthful. I can only guess at Abdel Halim Qandil’s pithy rejoinder tomorrow.

Election quackery pales in comparison to real politics. Ikhwan member Tareq Ghannam died in a teargas-induced stampede in Talkha on 6 May; he’s dubbed “reform’s martyr” by Kifaya. Al-Quds al-Arabi rightly detects a significant shift in the Ikhwan’s usual policy of self-restraint and backdoor negotiation with the government, while The Guardian reports the wily Ayman Nour hinting at a withdrawal from the presidential election, but who knows if this is simply the latest in Nour’s endless self-promotion stunts. Kifaya announces a worker demonstration today on the steps of the High Court, with an intriguing call for a labor-based political party (and the stock demand of independent unions).

One more time in case it’s not yet clear: Egyptian politics are changing. Remonstrance is over. Legal trickery is fooling no one. Regime half-measures invite bolder demands, not successful cooptation. Prevarication is useless. Supplication is dead. Perceptions of regime weakness translate into political action by a motley opposition. Mimicry and cross fertilization are the currency of politics: one group protests, sending learning cues to others. The famously conciliatory Ikhwan are now trafficking in street protest, and workers are mimicking judges and professors in demanding self-representation and self-governance. It’s the transition from subjecthood to citizenship, in real time.