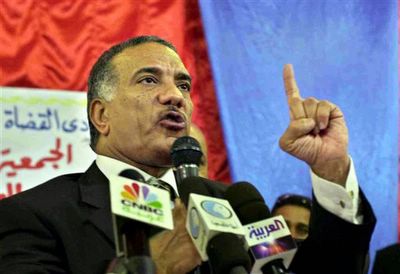 No doubt this will be one of the most contentious issues this election year, with everybody who’s anybody weighing in on the matter. The American government has made its position clear: it wants international monitors. Never mind that the Bush administration has zero credibility to demand anything, least of all election monitors. The travesty of polling in Florida during November 2000 springs to mind, leading to international election monitors for the 2004 American poll. But worry not, the cornered Mubarak regime dares not bring up any of this, it’s too busy sending its hapless envoy to Washington and NY to grovel and remonstrate with its increasingly impatient patron. For about 10 minutes, I actually felt sorry for Ahmed Nazif.

The man got a good drubbing everywhere he went on his fool’s errand. But then he lost my pity when he started whining like a loser and spewing inept stupidities lifted straight out of Gamal Mubarak’s phrase book. Skeptics should give Hosni Mubarak’s reform antics “the benefit of the doubt”; “Is it really forbidden for a son of a President to be active politically? You should focus on the process, not on the people,” and “Egyptians are very kind people by nature. And kind people are easy to influence.” Finally, the kicker, on why Egyptians aren’t yet ready for democracy: “There is a maturity process that has to take place.” Dear Mr. Nazif, pardon my immaturity, but please shut up and go back to devising “e-government” initiatives or whatever it is you were originally hired to do. Stop making an utter fool of yourself by pontificating on that which you do not comprehend. It’s irritating.

While Nazif hemmed and hawed in the U.S. over international monitors, offering up his unsolicited and irrelevant “personal opinions,” his boss was all chest-thumping and indignation about the issue. Gamal Mubarak vowed ungrammatically (but details details): “Egypt will not be imposed any model of control from outside.” Now, as impressed as I am that Mr. Globalization really is a jealous nationalist at heart, I have one niggling question: is it part of democracy that someone who holds no cabinet post nor has ever been subjected to any mechanism of accountability parade around disbursing authoritative public statements? I’m just wondering. Of course, it could just be that Gamal Mubarak is privy to a state of the art theory of democracy of which I’m not aware. He’s been awfully active of late, lecturing opposition parties on what they need to do to avail themselves of the unprecedented democratic opportunities conceded by his father. I refer you to the daily al-Ahram of the past few days, which has been a faithful transcriber of Gamal’s every precious nugget of fraternal advice.

Among thinking commentators, the issue of international involvement in Egypt’s upcoming elections has sparked serious debate. Ex-judge Tareq al-Bishri wrote an important article in al-Araby coming down against the idea, while al-Ahram Weekly surveys favorable opinions among other thinking intellectuals. Let’s remind ourselves of some important facts: election monitoring has always been a very sore point for the regime, and it’s been up to domestic monitors to confront it on this politically taboo topic. Recall the 1995 parliamentary elections, the bloodiest in Egypt’s history (60 dead and hundreds wounded). The Egyptian Organisation for Human Rights and sister groups were valiant, unheralded monitors, documenting all manner of NDP abuses, including the ruling party's fomenting of the ugliest form of sectarian bigotry in its campaigning, specifically in the district of al-Daher (see the EOHR’s Report Nobody Passed the Elections for this and other lurid details). When sociologist Saadeddin Ibrahim said that his Ibn Khaldoun Center would monitor the 2000 poll, he was swiftly charged with “tarnishing Egypt’s image” and summarily dispatched to the first of his two trials. If my memory serves me correctly, not a word was heard back then from the American government and its Middle East democracy engineers about the necessity of election monitoring. Back then, you see, the American administration was perfectly happy with the adequate services of the Mubarak regime. It saw no reason to rock a perfectly steady boat.

These are different times, however, and the U.S. administration and its army of instant Middle East democracy experts and their “Middle East Partnership Initiative” are now very very concerned about free and fair elections in Egypt. Yes, very very concerned, and so they want to see Egypt become a shining beacon of democracy to its neighbors, and they don’t buy Mubarak’s pathetic scare tactics anymore about the Islamists taking over. The Americans are fed up with the crusty Mubarak regime, it seems, and have settled on free elections as the legitimate and smart way to ease said regime out of power. The road to the Americans’ new plans for the Middle East runs through reasonably competitive elections, with international monitors. Hence all the stern warnings to Mubarak over Ayman Nour (the Americans’ new favorite after they dumped Gamal Mubarak), the cancellation of Condoleezza Rice’s Cairo trip, her friendly signals to the Islamists, and above all, the Americans’ sudden concern for what the Egyptian people want. Listen to Richard Boucher, American State Department spokesman, as he mulls over Mubarak’s reform: “Is it enough progress? Is it going to do what the Egyptians and we and, more important, people in Egypt want?” he asked. “We’ll see.” With so much pressure at home and abroad, is it any wonder that Gamal Mubarak has been looking so haggard lately? Looks to me like he’s not getting enough sleep. Tsk tsk.

The American administration’s utterly self-interested concern for international monitors is likely to considerably complicate the debate in Egyptian circles. The Egyptian government will cry “national sovereignty”, decry foreign meddling, and quietly try to woo back the Bush administration, all at the same time. Most damaging, it will also play on Egyptian judges’ turf instincts and sell international monitors as an attempt to impugn the reputation of the Egyptian judiciary. As we know, judges are embroiled in their own serious battle with the executive to meaningfully supervise the elections. Judges are not going to take kindly to upstart international monitors parachuting in to step all over their turf. The executive can use the cudgel of international monitors to break the judges’ unified ranks and compel them to submit to election monitoring shorn of their clearly stipulated conditions of 13 May. This is why many Egyptians, myself included, would be perfectly happy with judicial monitoring on the judges’ terms, sans international observers. And given the significant pre-election maneuvering at which the government is so adept, particularly drawing up voter rolls to include hundreds of ghost voters and dead people, I really don’t see how any team of international observers can get at some of the most pernicious forms of fraud and rigging.

International election monitoring is an excellent idea, but not for the 2005 Egyptian poll. In my opinion, it’s a great idea that comes at a very bad time, not because the Egyptians are not ready or any such insulting nonsense, and not because of faux nationalistic drivel, but because of the high probability that it will torpedo a much too precious and delicate ongoing process. The judges’ struggle is too important to be sabotaged by an issue the Americans are pushing cynically and the Egyptian government is all too willing to deploy craftily. Much more effective would be domestic monitoring by Egyptian human rights groups, with moral support from the internationals, and both supporting and aiding the judges, not supplanting them. Only then will judges gain the control and prerogatives they’ve been seeking, and perhaps even invite international observers of their own accord. But until then, thanks but not this year.

In the long run for Egypt, I can think of no better system than India’s venerable and exemplary Election Commission, a pillar of the Indian political system that has been ably and effectively administering elections since 1950. An autonomous, constitutional body, the Commission administers elections from A to Z, enjoys an independent budget, and its decisions can be challenged before the courts. “It is the Commission, which decides on the location of polling stations, assignment of voters to the polling stations, location of counting centres, arrangements to be made in and around polling stations and counting centres, and all allied matters.” Election Commissioners “enjoy the same status and receive salary and perks as available to Judges of the Supreme Court of India. The Chief Election Commissioner can be removed from office only through impeachment by Parliament.” The Commission’s renown is such that its members often serve as international election observers.

An independent commission is the only way Egyptian elections can be safely conducted, far from the stranglehold of the executive branch. It has the potential to remedy all the ills plaguing our elections since the 1940s, and would fit in perfectly alongside Egypt’s robust judiciary and its hard won powers of judicial review. The idea is already gaining ground among Egyptian legal experts, who no longer deem it sufficient that elections be conducted under the aegis of the Justice Ministry (to say nothing of the current travesty of the Interior Ministry coordinating elections). Above all, an independent Election Commission would restore confidence in the game of elections and reinvigorate and rationalise the entire political process in Egypt. It addresses Bishri’s fears of foreign-inspired fragmentation and leaves room for international observers to come in from positions of parity, not imperious inspection more interested in discrediting a regime on its tottering last legs than empowering the average Egyptian voter.