First things first. Thankfully, Justice Hisham al-Bastawisi is in stable condition after suffering a heart attack early Wednesday morning (pictured left, 17 March 2006). He’s scheduled to leave the hospital in a few days for a much-needed period of recuperation. Hisham al-Bastawisy is not just a frontline leader of the judicial independence movement and a tough-as-nails man of principle. He’s also a very generous, kind man and a model of an upstanding Egyptian professional. The news of his affliction was devastating, so thank God he’s now doing well. I’d like to extend my heartfelt wishes for a speedy recovery to Justice Bastawisy and his family, especially his wonderful, brave sons. 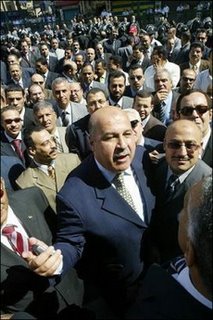 Next, in a verdict that defied many breathless expectations of dismissal, the disciplinary tribunal absolved Mahmoud Mekky (right, centre) of all charges and censured Bastawisy, as per Article 108 of the existing judiciary law. Two points bear emphasis. First, the law actually does not specify acquittal as a possible outcome of disciplinary proceedings, only dismissal or censure (Article 104, 108). Bizarrely, then, acquitting Mekky actually goes against the letter of the law. Second, the punishment of censure carries no professional or personal repercussions, especially for a senior judge at the very top of the judicial hierarchy such as Bastawisy. It is nothing more than a form of moral blame that, under the blatantly politicised circumstances of the original referral to the tribunal, carries no weight whatsoever (AFP Photo).


Ironically, then, the verdict reinforces both the shortcomings of the existing law and its obvious manipulation by pro-regime judges to silence and discredit their outspoken colleagues working for real judicial independence. There is no clear legal rationale for acquitting Mekky while censuring Bastawisi, lending credence to claims that this is a face-saving manoeuvre by disciplinary tribunal head Fathi Khalifa, perhaps in response to pressures from on high.

Though the verdict is not subject to any form of appeal (a major failing of the current law (Article 107) that the Judges Club has long sought to rectify), it was immediately interpreted as a retreat by the government and a respectable victory for the judges. For reasons I cannot fathom, and with not a shred of credible evidence, rumours had been flying about that the leadership of the Judges Club would accept some sort of a “deal” with the powers that be. I won’t devote any time to such ignorant tongue-wagging, except to note the extraordinary levels of misinformation, hyperbole, and ceaseless second-guessing about all matters judicial these days. The Judges Club did not strike a deal, but managed the crisis with admirable poise and resolve, and did not give in to myriad pressures, rumours, and all the rest. It has now called off the judges’ sit-in held since 18 April in solidarity with Mekky and Bastawisi. 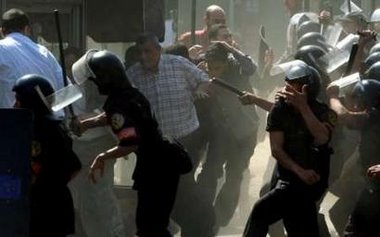 Once again, uniformed and plainclothed police agents used much violence against peaceful demonstrators expressing their solidarity with judges and with Ayman Nour, whose appeal was rejected today by a circuit of the Court of Cassation, to the shock and dismay of many, though I’d like to reserve judgment until I read the actual court ruling. In a laughable statement issued early this week, the Interior Ministry had attempted to portray its violence against citizens as perfectly legal. Several hundred demonstrators from the Ikhwan and Kifaya were arrested yesterday, adding to the earlier waves of arrests over the past month, all of them peaceful people expressing their solidarity with judges. (Reuters Photo).

Perhaps it’s worth pausing here and reflecting on one year of consistent and highly unusual public visibility for judges since the April 2005 general assembly of the Alexandria Judges Club. Judges’ quiet, ceaseless, years-long struggle for autonomy and full electoral supervision has now become a national and even international obsession, carrying in its wake intense attention and potentially negative repercussions that I flagged back in December. Judges never set out to be heroes, saviours, rebels or any of the other ridiculous adjectives coined for them by international observers for whom it's suddenly fashionable to praise Egyptian judges.

When judges repeatedly say that they only want their independence, this is not some coy demurral or false modesty, but a reasoned recognition of the risks of public adulation. On the one hand, judges thrive on and appreciate the extraordinarily intense public support for their goals. On the other, there are real concerns about the harmful professional effects of the growing bonds between judges and public. Judges not only do not seek but actually frown upon any form of public approbation of their rulings or persons, rightly fearing any dilution of their impartiality. This strange predicament is made all the more acute by the vexing issue of electoral supervision. Let’s remember that the reason we’re seeing judges at the centre of politics today is because of their constitutionally-stipulated role of electoral oversight.

Every time an election rolls around, judges find themselves wrested from their courtrooms and entrusted with ensuring the integrity of elections in a country with a rich history of electoral fraud. A young judge gives voice to the dilemma: “As a judge, of course I don’t want to be involved in elections, it’s not my purview. But as a citizen, I know that the judiciary is the only institution capable of standing up to the police and making sure elections are clean.”

Why and how judges came to be election trustees in the first place is a story for another day. But now they have made it their mission to fully supervise each and every election that takes place in the country. This is bound to put them on a collision course with a regime not content to manipulate simply parliamentary and now presidential elections, but has its grubby paws in every other internal electoral exercise of any social institution, from sports clubs to labour unions to professional associations to student unions to whatever is left of public sector companies.

Under these conditions of a repressive regime unable to extinguish the fact of elections yet still able to fix them, it makes sense that a tacit alliance develops between citizen voters and the judges entrusted with monitoring the polls. Just as citizens have been manifesting their solidarity with judges, so is the leadership of the Judges Club now deliberating on working to release all those detained by the police over the past month for their support of Mekky and Bastawisy. But there is a different between a strategic alliance for a focused goal, and an easy but harmful deification of judges. 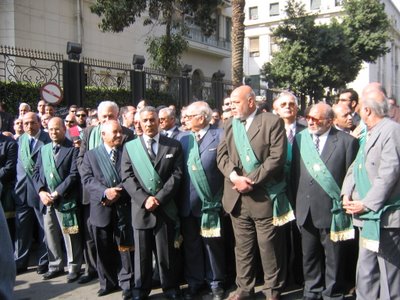 Expecting judges to be the heroes and saviours of Egypt is expecting far too much. It is true that the country is desperately in need of inspiring leaders and symbols. It is true that judges cut intriguing and honourable figures. And it is true that judges have always been held in high esteem and even awe by almost all sectors of Egyptian society. But these are no reasons to have judges replace elected officials as national leaders. In my opinion, effectively supporting judges means backing their demand for a new judiciary law, and backing their mission to meaningfully supervise elections so that we can get the clean and capable leaders we deserve. And then so we can throw them out when they don’t deliver. (17 March, 2006).

It goes without saying that this is a protracted battle that has been ongoing for decades and will continue for several more. But the battle is not forwarded by treating judges as infallible Olympian beings who will rid the country of all that ails it. It does no good to sensationalise their plight and trip over ourselves coining terms such as “rebel judges” and a “judicial intifada” and all the other breathless assertions. As a citizen, I instinctively love the now-famous slogan “Judges, judges, deliver us from the tyrants!” that is a staple at every solidarity demonstration. But as a professional and an analyst, I cannot succumb to the fantasy that judges are the deus ex machina that will realise democracy, restore justice, and make life wonderful. Judges are already grappling with tremendous stresses. It’s highly unfair to saddle them with the hopes of a nation.