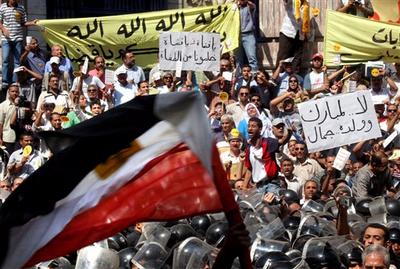 Judges convened their general assembly meeting yesterday, where deliberations lasted for about six hours as demonstrators gathered in solidarity outside the Press Syndicate next door. The majority of judges resolved to monitor the presidential poll next Wednesday, on the following terms: (1) judges will permit members of civil society watchdog groups to enter polling stations and observe the vote, (2) judges will hand over copies of voting figures to candidates’ proxies, and (3) those judges who have been distanced from monitoring by fiat (approximately 1,700) will form their own fact-finding commissions and monitor the vote anyway, roving between polling stations much like the citizen watchdog groups.

Far from a capitulation, the judges’ decision is an exquisite example of calibration and measured defiance. All three of their conditions are in explicit contravention of the Presidential Elections Commission (PEC) and its imperious chairman, chief of the Supreme Constitutional Court Mamdouh Mare’i. Because they have decided not to give up on the cause of clean elections by boycotting monitoring, judges have now put themselves on a clear collision course with the PEC. Independent judges have essentially resolved to take matters into their own hands, bypassing Mare’i’s obstructionism and thus thoroughly puncturing his already threadbare legitimacy. So now we’re faced with a delectable but by no means unprecedented irony. The battle for Egyptian judicial autonomy and clean elections hinges more than ever on intra-judicial dynamics. But we’ve always known this, mish kida? In Egypt, there are judges, and then there are judges.

Judges’ collective resolve this year is in no small measure due to the leadership of several remarkable men of the Egyptian bench who are risking a great deal for the causes of professional autonomy and continued public confidence in the judiciary. To name just a few: Alexandrians Hossam al-Ghiryani, Ahmed Mekki, [Alexandria Judges Club president] Mahmoud al-Khodeiri, and Ashraf al-Baroudi, all inspired by the example of honorary Judges Club president (and wry Alexandrian) Yahya al-Refai. In Cairo, the outspoken Hisham al-Bastawisi and Judges Club board member Ahmed Saber are noteworthy, as are Hisham Geneina, Muhammad Nagi Dirbala, and Tal’at Abdalla.

Judges Club President Zakariya Ahmed Abdel Aziz deserves special mention, for he was not suddenly catapulted into the limelight this year but has had a track record of independence and relative outspokenness. In June 2001, Abdel Aziz beat long time regime loyalist Moqbel Shaker to the presidency of the Judges Club by a narrow margin of 200 votes. Shaker is the quintessential pro-regime judge, first coming onto the scene back in March 1969 in the Judges Club election that Nasser’s legal henchmen tried but failed to rig. But Abdel Aziz’s first year as president was marked by ever-escalating tensions with Shaker’s men, who had secured the board. Early elections were called a year later in June 2002 to resolve the crisis, with turnout approaching 50%. This time, Abdel Aziz triumphed over Shaker by 732 votes, ending up with a like-minded board. His election slogan: “Change and Renewal” (al-Taghyeer wa-l-Tajdeed).
Sure enough, his leadership has meant an amplified political profile for the Judges Club and more insistent demands for a new judiciary law. In June 2003, the Judges Club general assembly refused to comply with NGO law 84/2002. It is an enduring irony of Egyptian politics that the Judges Club is governed by the NGO law, i.e. it answers to the Ministry of Social Affairs! Clearly, judges are having none of it. Then in March 2003, in an unusually bold move, the Judges Club issued a high-profile statement against the Iraq war. Then, on March 12, 2004, 3,000 judges convened for another extraordinary General Assembly to protest warnings issued by the Supreme Judicial Council against judges Hossam al-Ghiryani (see more on him here) and Ahmed Mekki, the two Alexandrian judges spearheading the campaign for clean elections this year.

Rumours are now circulating that Moqbel Shaker has resurfaced at the Judges Club and is starting to drum up support for unseating Abdel Aziz during the next elections. He will surely gain the support of those still undecided judges ill at ease with Abdel Aziz and his board’s activism this year, as well as the backing of staunchly and openly pro-regime judges. Take PEC chairman Mamdouh Mare’i. When Fathi Naguib died suddenly in August 2003 while serving as president of the Supreme Constitutional Court (SCC), the regime scrambled to find another pliable judge from outside the court’s own ranks to continue trimming the SCC’s claws, especially after its July 2000 ruling requiring total judicial supervision of elections. It brought in Mare’i, an obscure head of the Cairo Court of Appeals and certainly no luminary in judicial circles, neither as a practitioner nor as a constitutional jurist.

Mare’i returned the favour swiftly. In March 2004, he clamped a lid on a raging debate exactly as the regime wanted it to be sealed. The debate centred on who gets to be defined as a judge and what organs are included in the vague moniker “judicial organs” (hay’at qada’iyya). The overwhelming consensus within the legal community is that only “sitting judges” adjudicating cases are to be counted as judges. And judicial organs are only those institutions that issue verdicts, such as the Administrative, Supreme, and Cassation Courts (and their lower rungs). In March 2004, Hosni Mubarak requested a binding interpretation from the SCC (one of its tripartite functions), and Mare’i decided to fly in the face of all expert consensus and adopt the broad interpretation of “judicial organ” to include the State Cases Authority and the Administrative Prosecution, both legal servants of the executive branch.

The coveted outcome? At sensitive moments such as elections, the regime can now use a seemingly legitimate SCC certification and mobilise its legal staff to man polling stations, thereby claiming that elections took place under full judicial supervision. Shoehorning the executive’s legal staff into judicial structures also helps undermine the latter’s coherence and dilutes their intractable esprit de corps.

As head of the PEC, Mare’i has managed to alienate ever-increasing numbers of people. Saad Eddin Ibrahim castigated the Commission for its vast powers and lack of any mechanisms to appeal its decisions (al-Raya, August 29). And this week, the Egyptian Organisation for Human Rights issued a very valuable report carefully detailing the PEC’s unconstitutional powers and the serious gaffes of its objectionable chairman.

It doesn’t end there. Further stoking festering tensions with the judiciary, Mare’i has enraged judges by ignoring the Judges’ Club repeated proposals, entreaties, and appeals on the proper conduct of judicial supervision. Insult was added to injury when the list of judges Mare’i drew up to monitor the polls excluded the names of 1,700 judges active in the call for judicial autonomy and supervision (al-Ahali, August 31, 2005). Finally, in a clumsy and transparent move, Mare’i ordered that the 329 main polling stations be supervised by heads of primary courts (easily amenable to executive influence), while more senior judges are relegated to the 9,737 auxiliary polling stations. Presidential Elections Law 174/2005 of course grants a preponderance of power to the heads of the primary stations.

The judges are proving to be shrewd and clear-eyed negotiators, with a keen sense of timing and studied escalation of their demands. Yesterday, they vowed to hold a sit-in at the Judges Club in October if the Supreme Judicial Council maintains its intransigent silence on the proposed new bill for the judiciary. Then they went for the jugular. Zakariya Abdel Aziz warned Mare’i, “The judges’ and Egypt’s reputation as well as the country’s future are in your hands. If this election takes place the same way the referendum did, the highest office, that of the president, will be under threat.” Note well. This is not just an upstanding judge berating an inferior colleague, but a pregnant reminder to Mare’i’s bosses in the regime. The message: judges are fully aware of the strategic resource they now control, namely the power of certifying the process of presidential election. In refreshingly blunt terms, Abdel Aziz is reminding Mubarak that presidential legitimacy is now in judges’ hands, and they are more than capable of effecting a constitutional crisis. Behold the devilishly unintended consequences unleashed by fake regime reform.

As we know, judges are drawing on a vivid collective memory of past struggles to animate their mobilisation this year. And they have their eyes firmly trained on the next battle: parliamentary elections in November. It seems clear that the boycotting trend has waned among judges, giving rise to perhaps a more effective strategy of participating on their own terms. I confess that I was very taken with the boycott option, but if upstanding Egyptian judges have decided to pursue another tack, the least we can do is wait, watch, and lend them our support.

More so than at any other moment in modern Egyptian history, the judges in 2005 have lent their esteemed imprint to the society-wide ferment for democracy and justice. It’s a remarkable symbiosis: judges use their hard won clout to push for truly free elections that represent the citizens’ will, and citizens’ groups reciprocate by expanding the popular support base for judicial independence. Each buttresses the other’s quest for self-governance and autonomy. Each sees the other’s struggle as inseparable from its own. I love the ubiquitous protest sign held aloft at nearly every demonstration this year (see photo above): “O judges, O judges, free us from the tyrants!” (Ya quda, Ya quda, khallasoona min al-tugha!).

This judicial-societal alliance is bound to have a profound effect on the future of Egyptian politics. Of course, the regime and its judicial minions will work diligently to restore the familiar ways of doing things. But rolling back such innovation will be a difficult task, especially if this year’s political energy spills over into next year, and the one after that (foisting Gamal Mubarak on us in a year or two is a foolproof recipe for continued agitation). As in 1968, judges this year have had an intoxicating taste of their own collective capabilities, plus a robust test of their moral support base in society. Does this raise the spectre of an imperial judiciary? Methinks that’s highly unlikely. More likely is a judicial-societal alliance struggling for rights, sparring with a defensive imperial presidency ever so gradually being trimmed down to size.