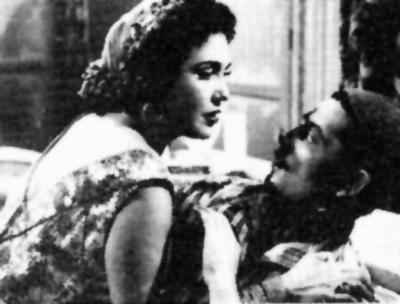 The opening scene in this movie is one of the greatest instances of film language that I have ever seen, performed without a single word and therefore more expressive than a thousand words. The entire film is a cinematic and aesthetic masterpiece (save for that horrible melodramatic ending), which I appreciated only when I saw it on the big screen.

Shukri Sarhan plays an upstanding, religious rural migrant who moves to Cairo to train to become a teacher and eventually return to his village and to his kind, sacrificing mother (Ferdous Muhammad). He boards with a tough, street-smart businesswoman in the teeming Qalaa’ district, mu’allima Shafa’at (Tahia Carioca). Shafa’at is the complete antithesis to Sarhan’s polite, God-fearing student; she’s loud, brash, worldly, and self-regarding. He wakes up at dawn to pray and study, she’s irked that his prayers disturb her delicious sleep. He’s circumspect and serious, she’s brazen and playful. Predictably, however, the righteous student succumbs to the dazzling siren, losing everything in the process.

Carioca created and forever embodies the quintessential earthy Egyptian femme fatale, the sort of character that the likes of Nadia al-Guindi and Fifi Abdou try so painfully to replicate (please God make them stop). They’ll never succeed because Carioca is not just a far more skillful dancer than they’ll ever be, but she could actually act and convey complex emotions. Call it what you will, but whatever Guindi and Abdou do on screen has nothing to do with acting and everything to do with vacuous self-promotion.

Shabab Imra’a stays with me because of its ambiguous message. When I first saw it, I read it as a straightforward misogynistic screed. Its overbearing, melodramatic didacticism vilifies Shafa’at as a beautiful, wily, immoral vixen, and we have the defeated older tenant ably played by Abdel Wareth ‘Asar as proof of her perfidy. But director Salah Abu Seif doesn’t leave it there. There are countervailing hints in the film that look down lovingly and pityingly upon Shafa’at as a victim of a hypocritical society and a contrived bourgeois moral code (typified by the prim mademoiselle played by Shadia). In this light, Shafa’at is a courageous non-conformist who is brave enough to live as she chooses, without hurting anyone, as she tells Shukri Sarhan in the film’s most moving scene. Like so much of Abu Seif’s work, Shabab Imra’a is a blistering critique of societal hypocrisy, in the guise of an aesthetically superior film.