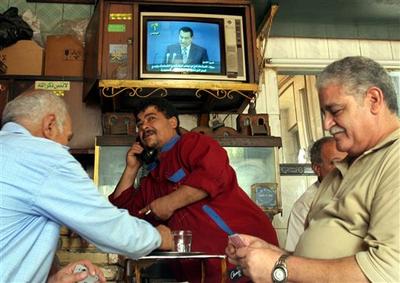 Don’t stop the presses. Carry on dealing those cards. At a staged, faux-populist event yesterday, Hosni Mubarak made the earth-shattering announcement that he’s running for a fifth six-year term this September. He also hinted at replacing emergency rule with an anti-terrorism law. This last could well have been a newsworthy item, but unfortunately the damage has already been done. All of emergency law’s repressive provisions designed to stifle freedom of assembly and association have already been transferred to the country’s corpus of ordinary laws. So as with so much else in our public life, abolishing emergency law would be a pyrrhic victory at best. What matters now is not regime stratagems dressed up as “historic” announcements. What matters is how the society-based momentum for reform will fare in the coming months, looking past the presidential elections ahead to the much more consequential parliamentary poll in November. I like to think that Egypt’s motley opposition, by which I mean the congeries of democracy-seekers not the officially recognised opposition parties, will surmount the obstacles posed by the Sharm el-Sheikh attacks and Mubarak’s latest manoeuvre and maintain their momentum. If their behaviour after Mubarak’s February 26 announcement is anything to go by, then we might be on the cusp of a heated second round of rambunctious struggle. But democrats might also lose focus, wither, or succumb to ill-considered compromises. Come what may, I’m not prepared yet to herald the demise of Egypt’s pro-democracy ferment.

Everything in Mubarak’s speech is derivative, and all of it is rhetorical, a perfect microcosm of his tenure. Its elements are a tidy little bundle of Nasserist populism and Sadatist theatre, what with the back-to-my-roots-in-my-perfect-little-village setup pioneered by Mr. Sadat with his televised pilgrimages to Mit Abul Kom. Gamal Abdel Nasser, however, never staged trips to Bani Murr, fawning state media in tow. And to his undying credit, he never took pride in the fact that his home village was dubbed “Kafr Paris,” as Mr. Mubarak made sure to inform us yesterday. Anyway, how anyone can take seriously a man who has just announced his intention to complete 30 years as president is a literal mystery to me. Mubarak’s florid speech detailing his presumptively stupendous accomplishments (ingazaat), and his self-presentation as a selfless, loyal public servant, should never obscure the hard facts. To wit, the coming presidential “elections” will certify his endless tenure, with the requisite democratic frippery. As further proof of the Mubaraks’ “New Thought” (if such is needed), Mubarak père’s eternal adviser Osama al-Baz had the temerity to draw up “the ten commandments” for presidential aspirants some weeks ago. The instructions of the self-styled sage? Not just anyone can be president of Egypt, absolutely not. The position apparently entails Herculean powers of mind and action, and plenty of prerogatives (a word Mr. Baz was keen to emphasise in English).

Here’s what the “free and fair” presidential elections will look like. Mubarak will dwarf a bevy of unknown extras along with perhaps Ayman Nour. After the chairmen of two main opposition parties (Tagammu’ and Nasserist) pledged to boycott the show (al-Wafd is still mulling it over), Mubarak is left with a gallery of the following eminent competitors: Ahrar party chief and Sadat nephew Tala’t al-Sadat, someone named Aladdin Elaasar residing in Chicago in the United States, and as Tuesday’s al-Ahram reported, the chairmen of eight cardboard opposition parties, including the fantastic Sheikh Ahmad al-Sabbahi. Surely you recall Sheikh Sabbahi? The chairman of the obscure Hizb al-Umma is best known for his defence of burning social issues such as the return of the tarboush (fez). On the personal level, Sheikh Sabbahi has distinguished himself by cultivating the arts of dream interpretation. I ask you: is this not a man worthy of contesting the Egyptian presidency?

The point: the elections are already an unserious farce before they’ve even started. They had the potential to be an improvement on Tunisia’s "contest" last November, but with the opposition boycotting and the jokers partaking, no Egyptian outside of Gamal Mubarak’s “Policies Secretariat” will give them a second thought. Pity the exertions of the president’s dim-witted advisers.

Too Little, Too Late

There are two points worth deciphering in Mubarak’s speech: the bit about emergency rule, and the bit about further constitutional reforms. On the second point, Mubarak said (my verbatim translation): “I will seek constitutional reform that allows freely choosing the state’s economic direction.” Effective translation: we will change Article 4 of the 1971 constitution about the state’s economic foundation. Article 4 states in part, “The economic foundation of the Arab Republic of Egypt is the socialist democratic system based on sufficiency and justice that prevents exploitation and leads to the narrowing of income gaps.” The presumed change will of course insert all of Gamal Mubarak’s pro-free market jargon and ditch any commitment to justice or the prevention of exploitation. Mubarak also said, “I will initiate constitutional reforms that impose further regulations on the president’s exercise of the prerogatives accorded to him when confronting dangers threatening the peace of the homeland or obstructing the state’s institutions.” What could this tangled bit of legalese possibly mean? The only meaning I can glean is a tiny trimming of the president’s emergency powers, leaving his extraordinary sundry powers intact. As all who know the 1971 constitution are aware, the problem is not just the president’s emergency powers but the codification of overwhelming presidential prerogatives in normal times. Trimming the edges will not dent the core. This is exactly like the list of promises at the 2003 NDP convention, where Mubarak promised to repeal several military decrees that ended up concerning marginalia or protecting encroachment on agricultural land (thus paving the way for erecting even more high-rises and luxury hotels on public land).

As for the sure to be intensely advertised item on emergency rule, let’s see what Mubarak actually says. First, he misleads the public and disdains critics of emergency rule: “we have an emergency law in force since 1914 just so you know…there’s no need to hang everything onto emergency law, we protect the people and at any rate if this is the crutch then we’ll find a solution while protecting security of the homeland and citizen.” Emergency law has indeed been around since 1914, but not continuously as Mubarak suggests here. However, it has been applied continuously since 4 pm on October 6, 1981. Second, Mubarak gives no indication of actually lifting emergency rule but does say this: “Whereas using emergency law has to a large extent achieved the limiting, combating and aborting of terrorist acts, and whereas many states have recently put in place comprehensive anti-terrorism laws, so the time has come for us in turn to implement a decisive and firm law that encircles terrorism, uproots it, and dries up its wellsprings.” The reference is surely to the U.S.A. “Patriot Act” and Britain’s Anti-Terror Act. But what Mubarak didn’t mention is that Egypt already has its own anti-terrorism legal package, predating the British and U.S. laws.

Egypt’s omnibus Law 97/1992 was introduced in July 1992 and formed the legal foundation for the state’s 6-month siege of Imbaba starting in December of the same year, to purge al-Gam’a al-Islamiyya members from the neighborhood. The law packed the Penal Code (Qanun al-Uqubat) with harsher punitive measures (hard labour for life and death penalty for many more crimes) and grants the authorities vastly expanded powers of seizure and arrest. Its capacious clauses are of course vaguely worded to nab everyone from violent Islamists to non-violent Ikhwan activists. The notoriously imprecise Article 86(bis) of the law was the basis of the charges against peaceful Ikhwan activists tried before military tribunals in 1995, 1999, and 2002.

Egyptian legal experts will tell you that since 1992, nearly all the provisions of Emergency Law 162/1958 have been quietly and methodically transferred into the Penal Code and assorted other ordinary laws. So Law 162/1958 is no longer needed, since its draconian provisions have been safely smuggled into the country’s legal corpus. To see for yourself, just pick up a copy of an annotated Penal Code (vintage 1937) at your nearest legal bookshop and feast your eyes. The number of subsequent amendments is staggering, including the notorious Law 95/1996 imposing a two-year prison sentence and prohibitive fines for “press offences” (read muckraking articles on regime figures and their friends).

No one in the opposition is taking Mubarak’s latest ploys seriously. The Ikhwan’s deputy General Guide Muhammad Habib said, “We are faced with statements and words upon which we do not hang much hope. We hang our hopes on actions. We see that there is an insistence on working with emergency laws.” And Ayman Nour made an eminently logical point, “It’s sad that President Mubarak is now talking about reforming in six years all that he has destroyed in the past 24 years.” Protests against Mubarak’s candidacy are already planned. An impressive coalition of Egypt’s activist groups is organising a protest on Saturday at 6 pm in Tahrir Square. The participants are the Tagammu’, Ghad, and Labour parties, the Karama would-be party, the communists and revolutionary socialists, the popular campaign for change (freedom now), Kifaya, Youth for Change, Writers and Artists for Change, Lawyers for Change, and the women’s group The Street is Ours.

After postponing it for one week in honour of the Sharm victims and their families, Kifaya is staging its anti-corruption protest next Wednesday, August 3 at 6 pm in Opera Square. The movement is also calling on citizens to gather at Magles al-Dawla (the administrative courts) on Saturday at 10 am, where its suit against the government for rigging the results of the May 25th referendum will be adjudicated (or perhaps postponed).

The big question now is whether the fallout from the Sharm el-Sheikh bombings will dampen the democracy momentum, or at least cramp the opposition’s room for manoeuvre. It’s a serious concern, but I don’t see the latest terrorist attacks giving the regime any new lease on life, or even much sympathy. Instead, everyone I know is talking about the security forces’ basic incompetence, about a disreputable Interior Minister who’s apparently immune from accountability, and about the suppressed grievances of Sinai’s Bedouin. It’s no secret that Egypt’s Interior Ministry has a horrible reputation, one it had the chance to salvage by showing some professionalism in the Sharm investigations. Instead, we got conflicting statements, imprecise and later retracted assignations of culpability to Pakistani nationals, and more concern with ferrying the president about the crime scenes than sealing them off for forensic investigators. People are drawing the inevitable comparisons between British police detaining only a handful of people in the wake of the London bombings while Egypt’s round up dozens. As I listened to the premature babblings of Interior Minister Habib al-Adli and Sinai governor Mustafa Afifi, and heard about the expected scapegoating of Sinai police chiefs, I saw in microcosm the basic problem of a dysfunctional regime. Intent on maintaining its own survival, it has long ceased to live up to the most basic of performance criteria.

In the midst of all this, I was delighted to see the inimitable Anthony Shadid reporting from Cairo again. Talk about professionalism, insight, and grace. Unlike commentators like yours truly who pontificate from the comfort of their armchairs, or those who pass off local scuttlebutt as reportage, Anthony Shadid is a superior model of an intrepid journalist. In his latest piece, he ends in the history-soaked alleys of Darb al-Ahmar (where I spent many a long lost childhood afternoon), “a gritty neighbourhood tangled amid the grandeur of Cairo’s medieval glory.” Who else but Anthony Shadid can pen a sentence like that, and who else can give voice to Cairo's (and now Baghdad’s) kind denizens with such respect and honesty?
Posted by Baheyya