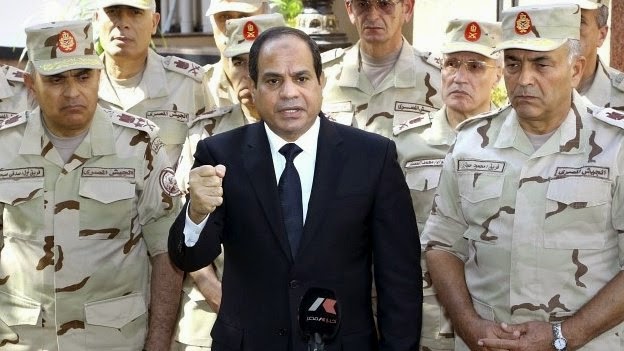 The latest leaked recording of Egypt’s generals conferring in Abdel Fattah al-Sisi’s office is the most damaging one yet. Earlier leaks were interesting, but not exactly shocking. The generals scrambled to legalize Mohamed Morsi’s detention after July 3 2013; dictated talking points to their media shills; and gave the Prosecutor-General instructions about high-profile cases. This surprised neither the coup’s friends nor foes, since everyone knows that the generals control every government official and micro-manage propaganda.

The recent leaks, however, take things to a new level. The generals don’t just rubbish their Gulf backers; scorn Egyptians as a starving, miserable mass; and generally ooze contempt for anyone outside their ranks. The recordings reveal how, in private, Egypt’s peak military officers see themselves. In frank, relaxed banter, they discuss how to milk the Gulf monarchs for more billions; rue the Nasser military’s non-profiteering mindset; and generally come off as money-grubbing hirelings ready to deploy military force anywhere in exchange for cash.

Thus in a five-minute conversation, the generals unmask their own elaborate self-mythologizing as nationalist, selfless public servants who have rescued Egypt and the region from an Islamist cabal. They reinforce critics’ longstanding claims that the Mubarakist Egyptian military defends not the national interest but its own sectional concerns.

The main thrust of the military’s mythmaking is that it stands above the partisan fray, ably steering the sacred ship of state. Endlessly producing and reproducing this ideology is a matter of survival for Egypt’s profit-minded generals in times of revolutionary upheaval, when a restless public opinion shifted from welcoming them in the early days of 2011 to denouncing their violence and venality by mid-year.

After the coup, Abdel Fattah al-Sisi and his SCAF fellows amped up their self-sanctification. Using the hapless Islamists as a foil, they cast the military as above politics and uniquely qualified to lead the nation. During his transition from general to president, Abdel Fattah al-Sisi lectured Ibrahim Eissa that all of Egypt should aspire to the military’s all-around perfection.

Now come the tasreebat that cut through the spin and get down to the essentials. Here is Sisi’s office manager general Abbas Kamel articulating a pay-for-service deployment doctrine, in contrast to Gamal Abdel Nasser’s 1960s intervention in Yemen. “What we’re in now is because of our previous mistakes. Look sir, regardless of patriotism and Arab nationalism and all that talk, we had to from the very beginning be like Syria and say you give me and I’ll give you. Otherwise we’re repeating the Yemen experience. No, it has to be you give me and I’ll give you. Let ‘em pay!”

Shortly before announcing his presidential bid, Sisi dictates to Kamel how to approach the Saudis for more money, making a clear distinction between the military’s own funds and the public treasury. “Look, you tell him we need 10 [billion] to be deposited in the military’s account. You tell him, that when God willing I win [the election], that 10 will then work for the state. And we want another 10 from the Emirates and another 10 from Kuwait. That’s in addition to a handful to be put in the Central Bank to balance the 2014 budget.”

When Kamel chuckles heartily and says that the Saudi head of the royal court Khalid al-Tuwaijri will faint on hearing of such huge sums, Sisi says, “Man, their money is like rice, man! Come on, ya Abbas ya Kamel!”

No one expects the junta to say the same things in public and private. But when Abdel Fattah al-Sisi constantly hectors Egyptians about belt-tightening, hard work, and obeying the state while brainstorming with his generals about feathering SCAF’s nest with Gulf cash, something more significant than hypocrisy is at work. In their own words, the generals’ core myth of unassailability is exposed as the shoddy, pathetic construction that it is.
Posted by Baheyya