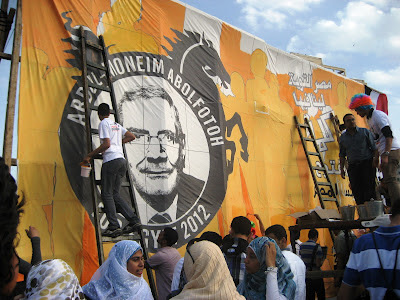 To kick off the official start of presidential competition, Abdel Moneim Aboul Fotouh’s campaign did a smart thing and showcased the most energetic part of his base: university students. Bedecked in the cheerful orange color of the campaign, they packed into dozens of buses from across Egypt and poured into Alexandria’s famed al-Qaid Ibrahim Square where they put on a marvelous show, pulsating with hope and jubilation at the imminent prospect of real presidential elections. 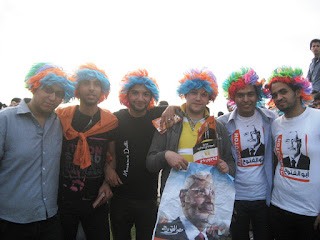 It’s impossible to be around a gaggle of college students and not catch their enthusiasm, especially if they’re wisecracking the whole time while working like bees. After a march on the Corniche, they stationed themselves in a nice grassy public space next to the Ibrahim mosque and set up shop. An instant fairground emerged, with booths selling campaign commodities and booths to sign up more volunteers; a poet’s corner; a wall display charting milestones in Aboul Fotouh’s public life; art stations; two roving guys with a drum; and a huge orange mural constructed and painted by Alexandria University students. 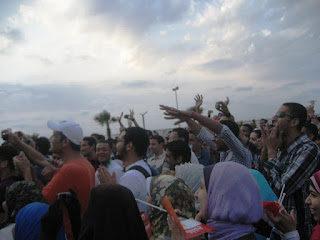 The poets’ stage hosted a string of eloquent spoken word performances and one hilarious stand-up routine where a young man parodied some highly imitable public figures, including Hazem Salah Abu Ismail and the vulgarian Tawfiq Okasha. 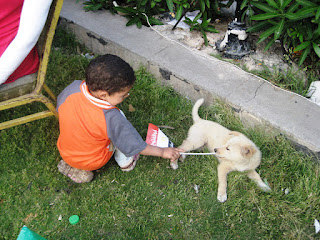 God’s cutest creatures were also out in full force, showing their support for Aboul Fotouh.

An energetic, friendly woman was supervising the students constructing the mural. Dr. Yasmeen Zaki is a professor in the Engineering faculty at Alexandria University and was responsible for securing a permit from the Alexandria authorities and dealing with their bureaucratic obstructionism. “We’ve been working like ants for the past six days, almost round the clock,” she said cheerfully, as students carrying buckets of orange paint darted back and forth.

Zaki defines herself as a liberal, and began working with the campaign a couple of months ago during the collection of citizen signatures. She said that what most attracts her about Aboul Fotouh is his personal honesty and ability to gather together different currents, which she said secular candidates she respected like Hamdeen Sabahy and Abul al-Ezz al-Hariri have not been able to do. 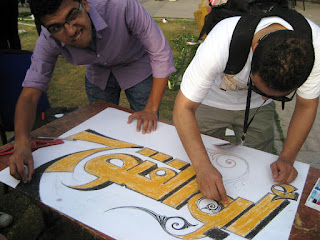 The theme of beyond-partisanship was amplified by a group of recent college graduates from the town of Etay al-Baroud in Beheira province. Unprompted, they took turns introducing themselves as “I’m ex-Baradei, I’m ex-Ikhwan, I’m ex-April 6th.”

Hailing from one of the Delta’s hardcore Ikhwan pockets that they said never allowed an NDP member into parliament in the past 30 years, they delighted in describing how residents reacted to their door-knocking for Aboul Fotouh. “I had dirty water thrown on me,” said one with a huge grin. “I had dust and dirt flung at me,” piped in another. Not to be outdone, a third quipped that he was lucky because he got only clean sudsy water thrown on him.

Muhammad Abdel Rahman Hamada, a recent law school graduate from Etay al-Baroud, explained why he’s a fierce Aboul Fotouh loyalist. “Non-partisanship is good for this juncture, because partisanship is exclusionary. My problem with the secular candidates like Hamdeen who’s a Nasserist and Khaled Ali who’s a socialist is that they exclude Islamists.”

Overhearing the Etay volunteers recount the hostility they faced from Ikhwan supporters in their district, an Ikhwan supporter interjected to explain why a strong party and organization were crucial in the presidential elections. A heated argument erupted over who Ikhwan youth would vote for. “The Ikhwan youth say they’ll support Mursi but they’re really supporting Aboul Fotouh,” asserted Hamada. “The problem with the Ikhwan is that their rank-and-file have no say whatsoever,” yelled a middle-aged man who was listening in.

By this point, the sun had descended into the Mediterranean and students had packed up the fair and filled the square outside Ibrahim mosque for the evening’s main event. Tens of thousands of students and Alexandria residents filled the streets radiating from the square, where a large stage had been set up and two giant screens were stationed farther back for crowds far from the stage.

Under huge strobe lights, in strode poet Abdel Rahman Youssef, starting things off with high-energy oratory that was met with wild cheers from the audience and drumbeats and chants from the Aboul Fotouh Ultras. 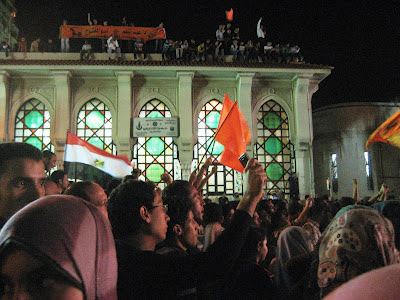 Like a series of warm-up acts before the entrance of the rock star, a string of luminaries then took the stage to deliver punchy, rousing endorsements that revved up the audience. AUC professor and Aboul Fotouh adviser Rabab El-Mahdi said that Aboul Fotouh represented the promise of true inclusion after decades of Mubarak’s destructive divide-and-rule policies, leading the crowd with rousing chants of “Yasqut yasqut hukm al-‘askar!”

A representative of the association of the deaf and mute announced their backing. A representative of the Revolution Youth Coalition, the most credible post-revolution youth alliance, announced his endorsement. A famous athlete, a young parliamentarian, an old friend of Aboul Fotouh: all tramped on and off stage, stoking the sense of anticipation.

The crowd went wild when it was the turn of Salafi Nour Party spokesman Nader Bakkar, greeting him with throaty chants of “One hand! One hand!” Khaled Said was there in spirit, as the Ultras invoked his memory and led the crowd in a haunting chant with heart-pounding drumbeats: “Fil Ganna! Ya Khaled! Fil Ganna! Ya Khaled!” And when Wael Ghonim came onto the stage to announce his endorsement, commotion ensued, with young people standing on chairs and screaming wildly. 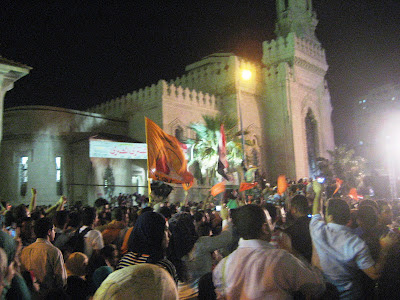 “And now, the student who stood up and said no to Sadat….” but before the female MC could finish her sentence, the crowd erupted, the Ultras set off massive fireworks, a campaign theme song started blasting, and Aboul Fotouh strode onto the stage in a cream-colored suit sans tie. Before starting his speech, he had to wait a good three minutes as this corner of Alexandria thundered its support for his bid to become one of the world’s most powerful political leaders.

From his origins as a charismatic leader of a faction within the Ikhwan, in less than a year Abdel Moneim Aboul Fotouh has experienced a stunning political transformation, metamorphosing into a national leader to be reckoned with. Unlike other dissidents who shined under Mubarak’s debilitating dictatorship only to be eclipsed in the exciting rough and tumble of Egypt’s new politics, Aboul Fotouh has augmented and diversified his political capital, comfortably easing into the role of presidential contender.

His trajectory is but one vignette into what this revolution has done, smashing the brick ceiling on Egyptian politics and giving free rein to a host of political talents and possibilities. 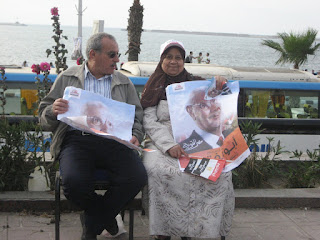 Looking around me at the Alexandria rally, it wasn’t the hyperactive students who stunned me, but the middle-aged mothers and fathers (and a few grandparents) who came out to stand three hours in the open air on a weeknight to listen to a politician. Aboul Fotouh has tapped into the Egyptian middle class’s thirst for public engagement, the same middle class that Mubarak shoved away from politics and steered into parochial neo-conservative privatized pursuits and corrosive conspicuous consumption.

To this educated middle class, Aboul Fotouh’s scrambling of the old categories of Egyptian politics is profoundly attractive. Here are mainstream Islamists piled onto Salafis piled onto Wasat Islamists piled onto liberals and leftists and feminists and unaffiliated people and people who still harbor a deep disdain for and mistrust of politics (one of Mr. Mubarak’s many parting gifts). For this diverse voter bloc, ideological purity or even ideological co-existence is less important than finding a trustworthy problem-solver president who isn’t going to fleece us all over again.

Aboul Fotouh’s programmatic appeal lies in an effective mix of a bold foreign policy (“strong Egypt” is his chief slogan), a centrist economic program, and an inclusive, ecumenical stance on identity issues that plays up Egyptians’ shared benign conservatism, whether they’re Muslims or Copts, and rubbishes the inward-looking aggressive conservatism that’s flourished within both communities over the past 15 years.

Personally, Aboul Fotouh is an unassailable character. He has plenty of integrity, lacks artifice in his political speech, possesses a pleasant old-fashioned reserve, and has a strong sense of dignity that doesn’t come off as imperious or in any way entitled (that’s Amr Moussa’s territory). He’s one of those rare Islamists who are not embarrassingly provincial like Muhammad Morsi, or remote, calculating organization men like Khairat al-Shater, or fence-sitters like Muhammad al-Beltagui, or any of the yet-untested Salafi upstarts. 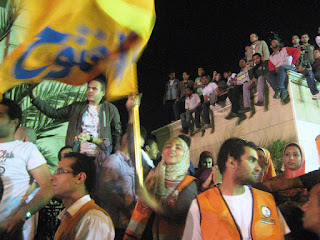 It’s an open question whether Aboul Fotouh’s personal and programmatic qualities can bring his brand to the lower classes, who are equally intent on political participation but lack the time and leisure of middle class citizens. Here lies the significance of the Salafis’ bombshell endorsement of Aboul Fotouh, for it is they who’ll carry his message to the lower and working classes. However, given the internal diversity of the Salafi world, it remains to be seen whether Fatehoon Salafis can convince their communities to switch allegiance from Hazem Abu Ismail and Muhammad Morsi to Aboul Fotouh.

If he does make inroads into the pious, suffering lower classes and peels off some supporters from the nervous upper classes, the divided Copts, and the fractious secular left, Aboul Fotouh’s bandwagon will be hard to beat.