Social Science in the Public Interest 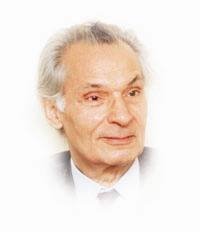 The Marxist intellectual, prolific development economist, and stringent perfectionist Ismail Sabri Abdallah passed away on 6 November, 2006, at the age of 81 (photo courtesy of al-Masry al-Youm). Abdallah harboured many ostensible contradictions. He was a scion of patricians who devoted his life to redistributing economic and political power to the poor. He was a deeply knowledgeable, even zealous follower of Karl Marx’s ideas while being equally brined in the profundities of Arabic thought and history (especially poetry). He fused a deep familiarity with and respect for southern Egyptian folkways with a charming, uncontrived Francophile streak. He spoke and wrote precise and lucid prose in Arabic, French, and English. His adult life oscillated between membership in underground Marxist organisations, long stints in prison, equally long stints as a decision-maker in the highest echelons of government, and collaboration with a wide network of international development organisations.

Ismail Sabri Abdallah was one of a nearly extinct class of public intellectuals who also doubled as public servants, and were highly esteemed in both capacities. Toward the end of his life, he told me, “I’m still a Marxist until this moment because I haven’t found a better method to analyse social events. I’ve been in prison and in power and I still haven’t changed my mind!” Continuously since the 1950s, he worked to apply social science to real-world problems, to use conceptual tools to mobilise broad swathes of the public rather than enlighten only narrow segments of the elite. He was a rare gem in an intellectual field cluttered with irrelevant theorists, sycophantic yes-men, and a stultifying, generalised air of mediocrity.


Abdallah was born in 1925 to a family of rural notables that hailed from Upper Egypt. His cultured, erudite father invested much in his children’s education. Ismail’s sister was one of the first to attend a boarding school established by Nabawiyya Musa, the pioneer advocate of women’s education. Ismail’s early intellectual strivings were nurtured by his father’s extensive library, particularly rich in the classics of Arabic literature. Ismail then enrolled at the Law Faculty and immersed himself in the heady politics of Egyptian communism of the 1940s, when various communist factions alternately competed and cooperated with one another and with other ideological formations to recruit adherents. In a conversation with me toward the end of his life, Abdallah recalled that it was during this formative period that he understood that electoral democracy was meaningless without a bedrock of economic redistribution.

After graduating from law school in 1946, Ismail could not pursue serious study of economics in Egypt since there was no Economics faculty (the Economics and Political Science Faculty would eventually be established in the early 1960s), so he traveled to the University of Paris, where he earned a doctoral degree in economics in 1951 (he wrote his dissertation on the theory of money). But Abdallah’s time in Paris was not confined to the university library. He mingled in French leftist circles, where he met his future wife, Gulpérie Aflaton, a free-spirited Egyptian woman from an aristocratic family, the sister of equally spirited socialist-feminist activist and painter Injy Aflaton.

The couple returned to Cairo and married in 1951, and Abdallah took up a post as a lecturer in Alexandria University. In November 1954, the bright young economist was recruited to become an economic adviser to the president’s office, but less than a year later, in June 1955, he was arrested, charged with membership in an illegal communist organisation, and tortured in a military prison before being released by an irregular tribunal. The abrupt oscillation between elite technocrat and political prisoner would not end there.

After the nationalisation of the Suez Canal in 1956 and the Egyptianisation of banks and foreign businesses, Nasser’s regime created the Economic Institution (al-Mu’asasa al-Iqtisadiyya) in January 1957 as a public holding company to manage all existing public enterprises that were formerly British and French assets. Abdallah was appointed as head of the Institution’s Economic and Financial Division, a post that entailed considerable access to the president. For the Economic Institution was not only a source of unfiltered technical expertise, but an attempt by Nasser to check other state institutions, especially the Ministry of Industry led by the ambitious Aziz Sidqi.

But only two years later, on New Year’s Day 1959, Abdallah was rounded up again along with 200 other socialists and communists, including the recently departed and much-missed Ahmad Nabil al-Hilali. They were tried by military tribunals and sentenced to three- and five-year gaol terms. Abdalla and his colleagues are pictured in the dock on 6 September, 1959.

Abdallah was a key figure in the remarkable world created by Egyptian leftists during their desert prison confinement from 1959-1964. His death is a serious loss for any attempt at reconstructing an oral history of this defining moment in Egyptian political annals. Abdallah recalled fondly and very vividly the rich educational and cultural activities of the prisoners, including lessons in everything from astronomy to mathematics to the staging and production of plays by two theatre troupes. Abdallah taught international politics, Abdel Azim Anis taught mathematics, and Ahmad Youssef al-Guindi taught Russian. But when Abdallah embarked on a translation of Das Kapital (Part One), the prison administration confiscated his papers, he remembered with a raucous laugh. For Gulpérie Aflaton, this period was particularly trying, as both her husband and her sister were imprisoned, an experience that she recounts in her memoir La ballade de geôles (2002). 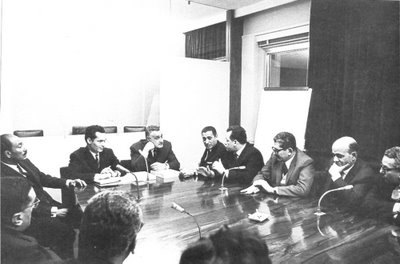 In yet another startling and abrupt transformation, after their release in 1964, the former prisoners of conscience were appointed to leadership positions in the state’s cultural institutions, essentially managing the Nasserist state’s remarkable patronage of the arts. Abdallah became chief editor of the venerable publishing house Dar al-Ma’arif. At the same time, he was on the editorial team of an entirely new and creative experiment, the leftist monthly review al-Tali’a (the Vanguard). When Gamal Abdel Nasser made a quick appearance at their inaugural editorial meeting, accompanied by Muhammad Hasanein Haykal, Abdallah (seated to Nasser's right) and al-Tali’a editor Lotfi al-Kholi (seated to Haykal's left) expressed surprise that the president would not sit down for a conversation. So Abdel Nasser sat down, and a sophisticated discussion ensued.

Reflecting on the man whose regime both violently harassed and dramatically promoted him, Abdallah’s tone held an unmistakeable hint of admiration, “He’s really a Shakespearean character: when he was powerful, he was not intellectually mature, but when he matured after 1967, he was no longer powerful.” 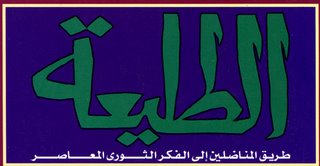 For about 10-15 years, al-Tali’a was one of a handful of the most important publications in Egypt, featuring pieces by leading public intellectuals such as Adil Hussein, Tariq al-Bishri, Fu’ad Mursi, Abu Seif Youssef, and a legion of unsung political economists. It was very much an effort to employ social science in the public interest, to air provocative findings and chart important trends for the benefit of both policy-makers and the general public. The pages of al-Tali’a are especially intriguing after 1968, when Nasser began to experiment with new policies and political structures, partly in response to sustained societal criticism of his regime after the 1967 war. And throughout the 1970s, I’d say the profile of the journal was heightened even further, as it turned into the leading forum to air candid and credible critiques of public policies, most especially Sadat’s Infitah.

Abdallah’s career as a public servant continued in the Sadat years. He was a member of the committee that drafted the Constitution in summer 1971, and was particularly instrumental in the inclusion of the clause in Article 18 that insists that the state “provide for the independence of universities and scientific research centres.” As the Director General of the Institute of National Planning (1969-1977) and Minister of Planning (1971-1975), Abdallah led a team of economists that sought to articulate a strategic vision for Egypt’s economic development based on a robust industrial policy and a cautious approach to integration in the international economy. But those visions were increasingly at odds with Sadat’s conception of Infitah, and so Abdallah resigned his ministerial portfolio when the new Mamdouh Salem government was installed in April 1975 to root out all obstacles to Infitah, including public officials with socialist commitments.

Naturally, Abdallah was among the 1,536 intellectuals and activists ordered arrested by Sadat on 5 September, 1981. In his collection of essays, Tabareeh Gareeh, journalist Salah Eissa wrote a very moving description of this prison stint, including anecdotes about their lively political discussions, and oral poetry competitions that the prisoners organised to pass the time. As Eissa tells it, Abdallah won every time, so deep and erudite was his stock of memorised extracts from the classical canon.

From the 1980s onward, Abdallah continued to apply the vocation of social science to the cause of social justice, but now outside the halls of government for good. He helped to direct the venerable Egyptian Society for Political Economy, Statistics, and Legislation, and then started the Third World Forum, whose mission statement reads, “Intellectual self-reliance is a cornerstone to assure the success of Third World struggle for development. Its work involves and is addressed to mass organizations, scientists, intellectuals, academicians, technicians and politicians. It promotes problem oriented theoretical and empirical analysis aiming to provide real options for policy makers and organized social groups.” The forum's signature project, Egypt 2020, builds on Abdallah's early work in Images of the Arab Future (1983), an attempt to map out an endogenous, strategic plan for Arab development that the Arab Human Development Report would later echo, though without the emphasis on the development of specific, alternative futures scenarios.

To me, Abdallah’s legacy is manifold and wide-ranging: His commitment to praxis, his fusion of sophisticated modelling techniques with careful attention to the peculiarities of the Egyptian case, his commitment to maintaining autonomy from “The Prince” while training his expertise on the content of public policies, his relentless energy and productivity, his critical stance on prevailing orthodoxies, his accuracy and precision. I know that I and perhaps many others will continue to be inspired by Abdallah’s core political judgements: his faith in popular mobilisation, his insistence that Egyptian policy-makers do have the choice to carve out independent, reasoned policies, his deep suspicion of attempts to romanticise Egypt’s monarchical past as some putative golden age of pluralist politics, and his clear-eyed assessment of how to overcome Egypt’s deeply rooted, undemocratic legacies.

Abdallah’s endearing personal qualities are no less evocative for me: he hated mediocrity and resisted it in his daily life. He was punctual to a fault, dapper but never ostentatious, gregarious but never babbling, truly modest but without a hint of falsity. He was exasperatingly stubborn and dogmatic about rival political factions, most especially the Islamists, the only issue in which his clear thinking gave way to what I think was really political envy more than anything else.

As those who knew him know well, Ismail Sabri Abdallah went to work every day in a nondescript office in begrimed building No. 36 on chaotic Dokki St., the kind of building that reeks of history, where the stairs sag under the accumulated weight of the years, the stairwells are pitch black, and the patterned tiles have taken on a dull, grey hue. His desk was perpendicular to the desk of his lifelong fellow traveller, Ibrahim Saad Eddin; the two looked like two ancient civil servants poring over administrative memoranda. While Abdallah was gregarious, Saad Eddin was the quiet scribe who softly interjected reminders or corrections to the occasional visitor who interrupted their quiet work routine. The tea always came in a chipped teacup and mismatched saucer, the chair was uncomfortable and downright evil, and the conversation was never anything but edifying, stimulating, and challenging.