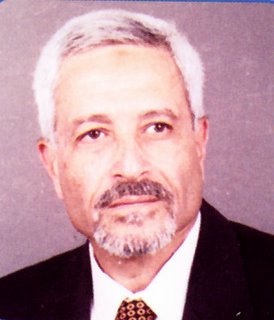 It was both predictable and unexpected. Last friday's judges’ protest attracted men of the bench from all over the country, the bulk of them young and outraged. Adorned in their red and green judicial sashes, they cut striking and dignified figures, arrayed in silent protest for one hour on the steps and veranda of the magnificent Bolkly villa that serves as headquarters of Alexandria’s Judges Club. It was predictable that the government’s most recent manoeuvre would fuel anger, radicalising the moderate and moving the hesitant. But the actual turnout was unexpected. Before the targeting of the four judges last week, organisers were hoping to draw at most 50. Instead, 400 attended. Well over half of them hailed not from Cairo or Alexandria, but Mansoura, Zaqaziq, and al-Saïd. They delivered eloquent speeches in solidarity with their wronged elders. Buoyed by the blessings of their mentors and their own experiences, these once anonymous young men are the ones the executive must now contend with, today and for years to come.

Though not among the four stripped of their immunity, judges cleaved to one eminent and much-loved senior judge whose ad-libbed comments on Friday drew unanimous plaudits and even tears. Muhammad Hossam al-Din al-Ghiryani (top) commands respect. The solemn protest was his idea, to send a clear signal that judicial action will not fizzle now that elections are over. Instead, it will revert to the original cause for which judges have always agitated: a new law that will effectively preserve their independence. Ghiryani is quite literally central to this battle. Three years ago, a curious confrontation between him and the Supreme Judicial Council rallied judges to action. In fact, it foreshadowed and fuelled current events, where pre-emptive strikes intended to thwart collective action had precisely the opposite effect. For judges, the integrity of elections has always been an important capillary, but autonomy is the jugular. Let’s dissect, shall we?

Straws in the Wind

The story begins with the 2000 elections, when two candidates appealed election results in the East Cairo Zeitoun district before the Cassation Court. On May 12, 2003, the Court circuit headed by Ghiryani ruled for the plaintiffs, arguing that since six out of 49 auxiliary polling stations were not supervised by judges, the declared results were null and void. The ruling was like hundreds of others, but with a key difference: the incumbent in this particular district was none other than Mubarak’s chief of staff, Zakariyya Azmi. Still, the constitution leaves it up to parliament to decide whether to implement such rulings, so the matter was largely moot. Until president of the Court of Cassation Fathi Khalifa intervened. In August, he issued a written comment criticising the ruling, highly anomalous by judicial customs and entirely frowned upon. It is an ingrained principle that sitting judges on the Cassation Court (high appeals court) are not subject to top-down review of their rulings; Khalifa’s comment raised several red flags.

A month later, in September, during parliament’s recess, a presidential decree raised judges’ retirement age from 66 to 68, flying in the face of a consensus among judges that prolonged tenure has corrosive professional and political repercussions. Professionally, a top-heavy judicial structure thwarts the promotion of creative legal talent and ossifies extant ideas. Politically, it risks creating pockets of government loyalists deferential to an executive branch that controls their terms and conditions of service and thus blunts their professional judgement. The plot thickened a month later, when the Supreme Judicial Council headed by Khalifa intervened in a dispute between the Judges’ Club and a retired judge seeking Club membership. The SJC issued a decree declaring that the Club falls within its purview.

Percolating tensions galvanised judges to action. On October 17, 2003, they convened at the Judges Club to deliberate on what they perceived to be growing provocation and intervention by the SJC. Ironically, Khalifa was also in attendance in the entirely honorary capacity of “President of the General Assembly,” pursuant to the Club’s by-laws. The two main orders of business were the raising of the retirement age and the relationship of the Club to the SJC. Judge Ahmed Mekky launched a tirade against the SJC, calling it “an appointed Council that has become of the rulers.” At this point, Khalifa leapt out of his seat and stormed out, tripping and falling as he left the dais. He has not since re-entered the Judges’ Club.

Unfazed, attendees forcefully argued against any oversight of the Club by any organ, including the SJC. Ghiryani delivered a wonderful address on the absolute autonomy of the Club’s general assembly, subject only to the “glass ballot box.” Addressing judges on the SJC, he said, “You are our elders, and command all due respect, but do not create roles for yourselves not granted to you by law. Would that you would properly carry out those duties that are specified for you by the law.” Eleven days later, on October 28, the SJC issued a decree signed by Khalifa asserting that any response to SJC decrees made “in an inappropriate manner” is a violation of the judiciary law and therefore subjects a judge to disciplinary action. But the intra-judicial dispute didn’t end there.

On January 12, 2004, the SJC singled out Ghiryani and Mekky, demanding that they explain in writing “the reasons” for what they said and did. Both retorted with detailed arguments uncovering the procedural violations of Khalifa’s summons. On January 28, the SJC replied to them in writing, “whereas what you have done is unprecedented in the history of the judiciary, and so as not to have it repeated, and pursuant to Article 94 of the law on the judiciary , we warn you not to regress again in the future.”

It was the proverbial straw that broke the camel’s back, the capstone to a long train of abuses. Khalifa’s high handed warning sealed his reputation as a pro-regime judge heading an institution under near-total executive domination bent on silencing independent, reformist judges. But once again, the executive had miscalculated, wagering that the targeting of two prominent judges would silence the rest. Instead, it spawned quite the opposite. Judges surmised that they had to stand up for the honour of their colleagues and take back the SJC. 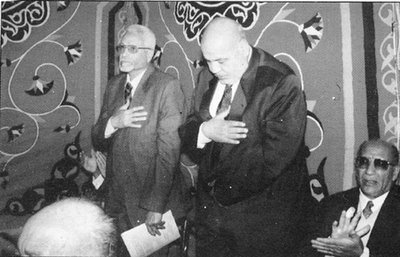 On March 12, 2004, they descended on the Judges Club in droves for the extraordinary general assembly that would start it all. Ghiryani and Mekky were literally silenced by the overflowing solidarity of their peers, receiving sustained applause for several minutes (top). Little-known Alexandrian judge Mahmoud al-Khodeiri (seated) delivered an inspiring address that day that would eventually catapult him to national prominence.

In April 2004, in an astounding upset, Khodeiri won the elections for president of the Alexandria Judges Club by a mere 2 votes (count ‘em!), beating out chronic pro-regime incumbent Ezzat ‘Agwa. Exactly one year later, the Alexandria Judges Club convened the general assembly that sparked judicial action for full electoral supervision, and the first time judges floated the idea of an election boycott. At that meeting, judge Tareq al-Tawil donned his sash and led his fellows in an impromptu vow to remain independent and vigilant against vote fraud. Judge Mahmoud Abu Shusha recounted a moving story about his experience in the 2000 poll. And judge Hossam al-Ghiryani said, “We want a truly independent judiciary that can protect freedoms and human rights, and the first of these rights is the right not to have one’s will falsified through rigged elections.” A few days later, the SJC issued one of its limp statements underlining that judges should maintain their “distance from working in politics.”

If recent history is anything to go by, the government and the SJC’s latest actions are only bound to unify the ranks of reformist judges and buttress their resolve for a new law. Leaks of yet another, impending increase in judges’ retirement age to 72 has fuelled fresh outrage. And each further provocation deepens suspicions of an all-out assault on the judiciary rather than the harassment of a handful of outspoken judges. The Minister of Justice’s latest decision to get ugly and cut off $10.5 million in annual funding to Judges Clubs all over the country can only reinforce this. It’s a mystery to me what sort of strategy the government and its legal retainers think they’re pursuing, since for at least the past three years each and every one of their ill-considered moves has spawned a damning counter-move. Surely they could manage this delicate process with a bit more finesse? Or some plain old common sense? But goodness, it boggles the mind, this uninterrupted train of miscalculations and blunders, does it not? I quiver with anticipation for the upcoming March 17 general assembly, which is likely to be every bit as stimulating as its predecessor two years ago, and then some.