All Eyes on the Judges 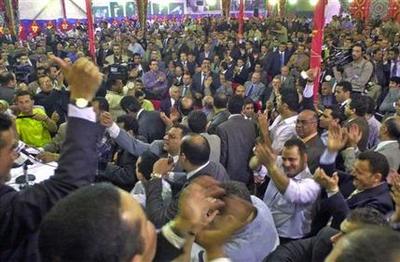 A few days from now on September 2nd, Egyptian judges will convene for another extra-ordinary general assembly in the stately precincts of the Judges Club in downtown Cairo. Kifaya and its cohorts have promised public rallies of support on that day. Egypt’s entire political class, untold numbers of ordinary people, and foreign parties invested in Egyptian affairs will be watching closely. September 2nd of course is the date set by the earlier extraordinary meeting of the judges on May 13th (photo above). On that remarkable day, judges issued a resounding ultimatum to the executive, demanding a revamped judiciary law and full supervision of elections from A-Z in exchange for their full cooperation.

Unlike the current presidential circus whose outcome we already know, the September 2nd meeting will be a true deliberative exercise whose results no one can foretell. Judges are not of one mind, surprising new developments are transpiring literally by the hour, and the stakes simply couldn’t be higher. This time, both the process of deliberation and its outcome are shrouded in mystery. When was the last time we’ve seen such genuine suspense in Egyptian politics?! I’m giddy with anticipation.

Since May 13th, judicial-executive relations have been characterised by maximum fluidity, tension, and fevered negotiations at all times. Oscillating between tenuous truces and measured escalation, negotiations have broken down more than once as each camp (and factions therein) angle for advantage and try to anticipate and manipulate their interlocutors’ responses. Rather than rehearse the extremely long list of rumours flying about, let’s quickly review what we know.

For the past four months since the judges’ first meeting in Alexandria back in April, the executive has done its utmost to sway and fragment the judges. Sundry regime emissaries have used all the means at their disposal, from dangling lucrative material incentives before judges to pursuing strategies of divide and conquer to appealing to judges’ natural instincts for order and a smooth functioning of the state. Extremely skittish at the prospect that judges will actually refrain from election oversight, the regime has pursued at least three tacks. First, it has mobilised its vast army of legal functionaries to stand in for real men of the bench should the latter boycott. Such legal apparatchiks consist of state attorneys and those in the administrative and general prosecution.

Second, the regime has made some concessionary gestures. It’s trumpeted “the largest package of promotions in the history of the judiciary” by promising the advancement of 1,742 judges (see al-Ahram of August 18). It’s said that the 54,000 polling stations will be reduced to 9,000 to enable near-complete supervision by Egypt’s 8,000 men of the bench and additional assistance by the legal functionaries. This news was broken by Judge Ahmed Mekky in his al-Jazeera interview here. Mekky also indicated that the government agreed that each judge will also have purview over what goes on outside polling stations to ensure that no voters are intimidated or barred from entering altogether, the main problem in the 2000 elections. And that voters will dip their fingers in indelible phosphoric ink to prevent them from voting more than once.

Finally, and in many ways most significantly, the regime has maintained a halo of ambiguity around its position on a new law for the judiciary, the judges’ signal demand. The executive has made vague promises but no concrete commitments, least of all on the pivotal issue of budgetary autonomy for the judicial branch and an end to the corrosive practice of appointing sitting judges as “consultants” to various ministries and executive agencies, a transparent means of bribery. By keeping the door half-ajar on the much coveted new law, the government can nourish indecision and factionalism among judges and thus cloud their decison-making processes.

Recall that immediately after the May 13th general assembly, the executive moved to challenge the status of the historic Judges Club as a legitimate representative body bringing together all of Egypt’s judges spread out among the country’s sprawling and labyrinthine judicial structures. Despite this, judges held fast to the leadership of Judges Club president Zakariyya Abdel Aziz and members of the board. In a remarkable move, in early July the Judges Club issued a damning report on the abuses and irregularities besetting the May 25th referendum, a clear signal to the regime that they mean business when they demand real judicial supervision. The report was entitled “Egypt’s Conscience.”

The judges’ next move was equally feisty. In a memorandum detailing their demands to the Presidential Elections Commission (PEC), judges stipulated that civil society monitoring groups must be allowed into polling stations to assist with supervision (al-Quds al-Arabi, August 18). This reveals that judges do not perceive citizen monitoring as encroaching on but rather supplementing their own efforts, a truly remarkable example of civil societal-judicial synergy on the cause of clean elections. This manoeuvre prompted an angry response from Mamdouh Mare’i, chief of the Supreme Constitutional Court and head of the PEC. Mare’i, by the way, has had rocky relations with judges ever since assuming headship of the PEC. The very latest reports indicate even more escalating tension between him and the Judges Club in the coming days.

It’s important to emphasise that a considerable number of judges are truly undecided and unsure of how to proceed on September 2nd. Many judges, conservative by nature, are genuinely reluctant to engage in such a high-level, risky tug-of-war with the regime, and many are extremely leery of being associated with international pressures on the regime. Yet, they are also frustrated by the regime’s constant obstructionism and its total unwillingness to concede any steps that might mean a more equitable distribution of power between state branches. Let’s not underestimate the predicament of Egyptian judges at this historic juncture.

Will judges maintain the remarkable esprit de corps that united them on May 13th, driving the hardest bargain the Mubarak regime has ever faced in its 24-year tenure? Or will they settle for some sort of a compromise formula and live to bargain again another day? Or will judges end up ranged among two or more recalcitrant factions? Whatever the outcome, a couple of points are worth underlining. Egyptian judges now know the power of making collective, public demands, buoyed by the admiration and support of pro-democracy forces and the glare of the international and domestic media. I wager that this is one genie not likely to disappear back into the bottle. Judges’ contemporary mobilisation has sown seeds sure to be reaped by them in future iterations of struggle, perhaps as early as the next round of elections to the Judges Club, and definitely during the parliamentary poll in November.

Most fortuitous in my view is one unexpected process of linkage that’s not likely to be sundered any time soon. The demand for judicial independence is no longer just a quaint slogan or narrow sectional interest, if it ever was. It has come to stand in for nothing less than the thirst for democracy and justice among Egypt’s society in movement. Fair elections mean total judicial supervision which means real judicial independence. From where I stand, that’s a wondrous chain.
*AP Photo.
Posted by Baheyya