The Colour of Protest 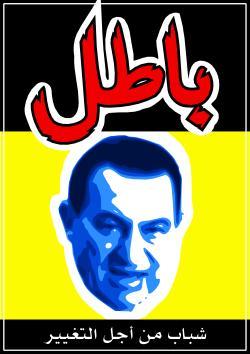 “In the name of nine million unemployed, your rule Mubarak is void!” With this and other biting slogans, the pro-democracy, anti-Mubarak movements greeted the freshly sworn-in president on September 27. Amazing how far we’ve come from just six years ago, when Mubarak’s regime was more coherent, more secure, more confident. Today, crises are a piaster a dozen, Mubarak’s regime is in the throes of a botched facelift, the economy is precarious at best, and Egypt no longer commands the regional heft its rulers have long parlayed into considerable influence. A decrepit regime faces off with a society in movement. Egyptian society is debating, organising, learning, mobilising, demanding, manoeuvring, grumbling, watching, transforming, and of course, sulking. The creativity of newly politicised young people is astonishing, like this brilliant Mostafa Hussein creation that takes a leaf from old Egyptian film posters. 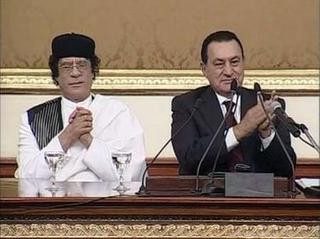 Egyptian popular forces have always been gifted at theatre. Deft symbolism, nimble humour, and an excellent sense of timing have always been their metier. All the more so when they’re contending with a regime quite unparalleled in its abominable image-making skills. On September 27, up in parliament, Mubarak’s handlers apparently thought fit to invite a fellow president-for-life to witness Mubarak’s “swearing in.” As Libya’s fantastic Mu’ammar al-Qaddhafi looked on and Suzanne gazed down lovingly from the gallery, Mr. Hosni Mubarak uttered the presidential oath to “sincerely protect the republic, respect the constitution and law, fully care for the people’s interests, and guard the homeland’s independence.” Down on the street a little later, flanked by Kamal Khalil, the outrage of ordinary Egyptians, and the literal drumbeats of protest, Kamal Abu Eita led a counter-oath, vowing to “continue the struggle for freedom and bread.”

The demonstration was chock-full of made-by-young-people paraphernalia, from the yellow Kifaya balloons and stickers to Mostafa Hussein’s creations to the novel drums brought by Amr. One demonstrator was decked out in a brilliantly simple costume of a paper crown and gown. The crown said, “Egypt’s Czar” and the gown enumerated the Egyptian president’s stupendous prerogatives. Street constitutionalism is back!

"We Want all of Egypt to Know the Facts"

The work of Youth for Change in particular deserves special mention, for its stunning admixture of political insight and artistic creativity. I’m completely in awe of the bravery and commitment of these young people, working on even less than a shoestring budget. Take the short film “Mubarak New Look 2,” where two young men take turns methodically puncturing prevailing political myths and Mubarak’s campaign promises. One young man is animated and impassioned, the other precise and professorial. Both are beyond eloquent, expressing in mellifluous ordinary language the duty, as they see it, of expressing reasoned opposition to the Mubarak regime.

There’s more here than mere hortatory speech. In the middle of the 28-minute film, we’re transported to a nameless “informal area,” which is in fact Kilometre 4 ½ on the Cairo-Suez highway. With the mournful tunes of a ney in the background, one resident after another recounts his/her horror stories with obtaining potable water. After 25 years of living there, residents still have no running water, and must pay £E1 per jerry can of water if they can find it. A 60 year old widow who lives alone paid £E300 for water to be delivered to her by someone who turned out to be a scam artist. She now depends on the kindness of neighbours for her drinking water.

A poor woman says, “I want to able to educate my kids like the president educates his kids.”

As Ali al-Haggar’s soulful voice soars in the background, the other young man sagaciously points out, “We deserve better than our current condition. Regardless of who rules the country, the question is how he will rule.”

"Every Slap on Our Face Makes Us Stronger"

Other productions share the spirit of “Mubarak New Look 2” but add humour and satire. Blackk Maskk’s “Gamal, Baba, and the 40 Thieves” is a short, entertaining send-up of the Mubaraks’ posse-state, to the tunes of Dalida’s lovely “Salma ya Salama.”

Mahmoud Tawfiq’s audio collage “Batel w’Noss!” has an oddly powerful effect. A mélange of voices from street demonstrations, cabaret belly-dancing music reminiscent of 1970s B-films, and Tawfiq’s own wry commentary, the audio medium conveys the intensity of people’s convictions. Tawfiq understandably can’t resist digitally altering the voice of PEC Chairman Mamdouh Mare’i as he announces the results of the September 7 elections. My favourite is his parting salute, “Thank you to those who decided not to give up their rights.” As a demonstrator tells him, “This is a weak regime, every slap on our face makes us stronger.”

For a long time now, the Internet has offered a forum for all manner of anti-Mubarak insignia, of varying levels of quality and cleverness. The Socialist Studies Centre’s publications have always been among the most daring. The American-based Egyptians without Borders maintain a collection of rather predictable emblems and photos. Prolific cartoonist Tantawy often has his moments; this spoof (right) on the wildly popular film of a few years ago Mafia makes me giggle every time I see it. Posse-state, indeed.

The Politics of Linkage

The above is only a sampling of the creative energies of Egyptians, overflowing after years of pent-up demands and execrable claims about their supposed “apathy” blah blah blah. Instead, before our very eyes, old actors are reinvented and new ones christened, old modalities are refurbished and new ones innovated. Seasoned dissidents stand shoulder to shoulder and argue with newly inducted political activists. The spirit of the 1970s is resurrected. Ahmad Fu’ad Nigm is everywhere. The palimpsest has a new layer.

In my opinion, the most remarkable process in all this is the blurring of the lines between supposedly “elite” issues such as trimming presidential prerogatives and “popular” concerns about bread, prices, education, health, etcetera. Whether in protest slogans or street theatre or the proliferating samizdat, weighty political issues are twined with everyday concerns. Presidential powers are a street-level issue. Bread and freedom. Politics is life, life is politics. Don’t take it from me. Go watch “Mubarak New Look 2” and listen to these courageous, clear-thinking young people who’ve turned political profundities into the stuff of everyday life.