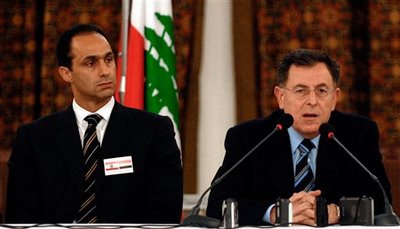 Gamal Hosni Mubarak has never met a tragedy he couldn’t use. Remember when he staged a “moment of silence” for the al-Salam ferry victims back in February? Or when he led an “anti-war rally” in Cairo stadium during the American invasion of Iraq in 2003? Now, nearly a month into the Israeli destruction of Lebanon, Mr Gamal Hosni Mubarak finds it fitting to lead a “delegation” of government hacks and assorted nobodies to “express support” for the benighted country. They descended on Beirut in an Egyptian military plane, but not before they sought and received the permission of the Israeli government. As we all know, Egyptian and Jordanian military planes are the only ones Israel is allowing to land at Beirut’s Rafiq Hariri International Airport.


My, my, my. Look at Mr Gamal Hosni Mubarak, with the best seat in the house, posing for the cameras. Notice the facial expression, all steely-jawed gravitas. Proper, no? Mark the badge with the Egyptian and Lebanese flags on his lapel. Nice touch. He told Lebanese television that the trip “reflected the Egyptian people’s solidarity with the Lebanese people and government.” Marvelous.

Once again, Mr Gamal Hosni Mubarak dares to speak for the Egyptian people. But this time, he added insult to injury by pretending to care for the Lebanese people.

But why should I be surprised? What else should one expect from the Mubarak regime but grovelling to the Israelis, using the Lebanese for a photo op, and keeping one nervous eye on the outraged Egyptian public and another on the demanding American bosses? A despised, depleted regime desperately clinging to power should never be cause for wonderment. A despised, depleted regime seeking to salvage some paltry war profits should not be cause for surprise.

And yet, the sense of outrage never wanes.

Hosni Mubarak’s regime is doing what it does during every regional war. It manages a precarious balancing act between following American and Israeli orders to a T while simultaneously engaging in theatrics to prove to its people that it represents their sentiments. 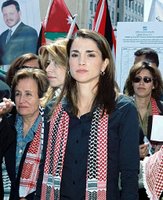 In April 2002, when Sharon re-invaded the West Bank and the Jordanian queen led a “solidarity procession” for Palestinians, Gamal’s mummy was not to be upstaged. She staged her very own stunt, leading a caravan of relief supplies to Rafah.


In March 2003, Gamal and friends staged-managed an “anti-war rally” featuring that veteran Egyptian anti-war activist: Adel Imam. And last year, Gamal made sure to attend Rafiq al-Hariri’s funeral and bond with his pro-American mate Saa’d. Today, it’s this business of the military plane carrying relief supplies and the photo op with the embattled Lebanese government. But not before Hosni Mubarak blamed Hizballah for ill-considered “adventurism” and merely pooh-poohed the crimes in Qana as “irresponsible.” 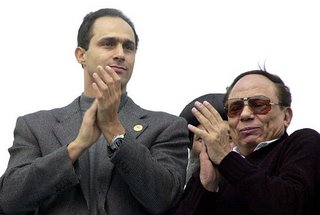 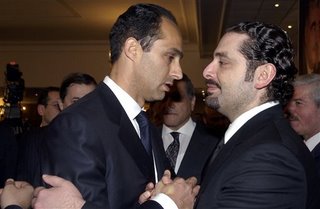 The regime’s dilemma is real, and never more acute than today. Its stock with both foreign bosses and domestic public is dangerously depleted, its credibility with both irrevocably undermined. Mubarak no longer carries any regional clout with the Americans and the aspiring regional hegemon, Israel. Ironically, his long years of dedicated advocacy of their interests have eroded rather than bolstered his value in their eyes. While he has not yet become a liability, he has turned into something of a nuisance, a bumbling old man bereft of intelligence or finesse, just barely doing his job as the go-between of last resort. He’s repeatedly called upon to thwart Hamas and press the Syrians to pressure Hizballah, he’s instructed to utter inanities about Arab Shia’s loyalty to Iran. And then he’s told to hunker down in Sharm al-Shaykh and shut up for a while until his next assignment.

Domestically, of course, Mubarak and his cronies are on an even more precarious footing. His compliant foreign policy has dramatically hastened his domestic fall from grace, ever since that fateful day in March 2003 when his huge poster was ripped off the NDP headquarters by anti-war protestors. Since then, his policies and his family have drawn nothing but non-stop condemnation and derision in the press, on the streets, and in salons. Another irony: Mubarak’s presidential elections manoeuvre actually unleashed new challenges to both his person and his office, instead of shoring up his legitimacy as planned. 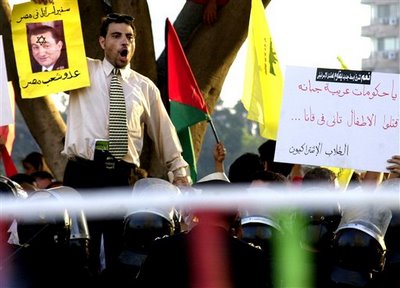 It’s no longer shocking to accuse Mubarak of being a faithful guardian of foreign interests, as these protestors did in Cairo on 6 August.

The biggest irony of all is that the Mubarak regime’s predicament may be sustainable, constituting an equilibrium state rather than some harbinger of imminent downfall or transformation. Undemocratic client regimes, even incompetent ones, can survive indefinitely. Tempting and logical as it may sound, there’s no inevitable sequence that starts with regional war leading to an angry public rising up and ending in regime change or collapse.

That means that one should brace oneself for the unbearable but very likely possibility that Mubarak and son may yet continue their miserable existence, having no compunction about capitalising on the suffering of the Lebanese people to cling to power. In fact, the Israeli destruction of Lebanon (and the American destruction of Iraq before it) offers quite an opportunity for Gamal Hosni Mubarak to further insinuate himself into Egyptian public life. He can “express solidarity” all he likes and at the same time emphasise the fait accompli of his public, political role.

There remains the stubborn little fact that the Egyptian and fellow Arab publics are not for one second fooled by their regimes’ pathetic ploys. If anything, the games these regimes play provide delicious fodder for activists and oppositions to underline how unrepresentative and cynical their rulers are. Rather than lull or confuse people, such games expose how these regimes endanger rather than protect national interests. Rather than entertain or edify, the games offend, injure, and galvanise.

To find out how the games end, we have to wait and watch closely, as Arab regimes, the American and Israeli regimes, and Arab publics duke it out on the battlefield of conflicting interests.