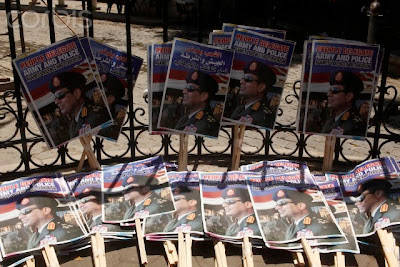 It’s unsurprising that in his July 24 speech, General Abdel Fattah El-Sisi would portray himself as a wise and honest mentor to the errant Mohamed Morsi. The twist is that he says Morsi didn’t understand the concept of the state because he’s an Islamist, not a nationalist (a claim Sisi repeats in his Washington Post interview). Sisi says he gave up on instructing Morsi and decided to “emphasize the idea of the state” to the judiciary, al-Azhar, the Coptic Church, the media, and public opinion, that is, all the institutions that supported the coup.

Right after the speech, the statist line was on everyone’s lips. The political adviser to the figurehead presidency asserted that the state is mandated to confront terrorism at any time, that the state and the people are in one camp, and that challenging haybat al-dawla in the streets is unacceptable.

The president’s media adviser added that El-Sisi’s call on citizens to demonstrate “is to protect the state and revolution.”

Abdel Latif al-Menawi, head of state TV under Mubarak, croaked that he’s been warning about the loss of state prestige since January 28, 2011.

Not to be outdone, civilian enthusiasts of military rule hopped on the bandwagon. Former presidential candidate Hamdeen Sabahy’s group called for more proactive measures to recover the state’s prestige. Activist Ahmed Douma said that he was heeding Sisi’s call to demonstrate “to support state institutions and get rid of all forms of terrorism.” The National Salvation Front practically begged the Interior Minister to disband the Ikhwan’s sit-ins, “to reinforce the principle of a state of laws and to preserve state prestige.”

Whether voiced out of conviction or rank opportunism, defending the state is the favorite ideological vehicle of Egyptian conservatives and counter-revolutionaries. Portraying the state as a sacred entity whose standing is forever under threat rules out any talk of state reform. But the really nefarious thing about haybat al-dawla is that it short-circuits any attempt to democratize the state, to open up its commanding heights to popular election and access. The implication is that the state can never change hands. It must always remain under the auspices of permanent custodians.

Superstitious Reverence
I don’t know when the term originated, but Arab state managers and their minions are obsessed with haybat al-dawla. Newspapers periodically run hand-wringing articles fretting about the decline of state prestige, especially after the 2011 uprisings. The term is a perfect mystification, casting an aura of mystery and gravitas on the reality of total political control: control over society by the state, and control of the state by an exclusive ruling caste. 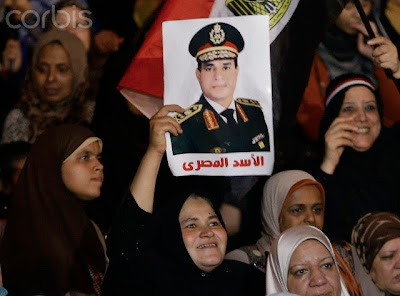 The word hayba holds layers of meaning: fear, dread, reverence, esteem, standing. Applied to the state, it creates an image of a larger-than-life force demanding veneration and radiating intimidation. The state becomes this mythical thing standing above a society of loyal supplicants and disloyal outlaws.

Fetishizing the state is not an Arab authoritarian invention. In 1891, Frederick Engels noted Germans’ “superstitious reverence for the state and everything connected with it.” Barely concealing his contempt, Engels captured the generic ideology of state veneration: “People from their childhood are accustomed to imagine that the affairs and interests common to the whole of society could not be looked after otherwise than as they have been looked after in the past, that is, through the state and its well-paid officials.”

Masking Hereditary Rule
Books could be written about how Egyptians have never succumbed to the ideology of state worship (and in fact, such books exist). Maybe because of that, the project of state reverence refuses to die, peaking during moments of widespread social protest.

Before the 2011 revolution, every time Egyptians demonstrated to demand their rights from the state, haybat al-dawla was invoked like a talisman to restore the status quo. In 2007 when protest fever spread to many groups after the spectacular 2006 Mahalla workers’ strike, commentators fretted about how state standing was being undermined, while others rightly pointed out that haybat al-dawla reflected the anxieties of a police state.

After the revolution, the challenge to state managers became existential. Not only had Egyptians broken the police backbone of the state, they even wanted to democratize this state and put some of their own people in top positions. They wanted free presidential elections, and parliamentary elections, and a new constitution. They demanded an end to state corruption, organized theft, and police rule. They wanted a state that works for its people, not a predatory machine that fleeces and kills them.

This is all sacrilege for the exclusive class of Egyptians who have come to see state office as their birthright. Whole chunks of the state are hereditary fiefdoms. If you’re a foreign service officer, then it’s probably because your father was. Same with the judiciary, the police, public universities, and the state-funded culture industry, to say nothing of cabinet portfolios. Hosni Mubarak merely wanted to extend the hereditary nature of state office to the presidency, but the revolution ended that dream.

If family members of state elites are not in the same line of government work, they’re in another. Former SCAF chief Mohamed Hussein Tantawi’s wife drew a salary from a public electricity company well past retirement age. The government terminated her contract only after her husband was himself retired by former president Morsi. Similarly, General Sami Anan’s wife continued to hold the No. 2 post in the Taxation Authority past retirement age. Her subordinates protested vigorously against her, but she was only retired when her husband was retired along with Tantawi.

The point is that over time, the Egyptian state has come to be controlled by a privileged caste that’s not about to sit idly and watch a popular revolution snatch its incredible perks. Of course the ruling elite don’t come out and openly say this, though they say it privately at their gaudy weddings and other tacky gatherings. They have to devise a smokescreen for why ordinary citizens and counter-elites like the Muslim Brothers can’t be let into the state sanctum. They call that smokescreen haybat al-dawla.

State Prestige under Mohamed Morsi
Not surprisingly given his conservative, elitist worldview, Mohamed Morsi tried to rehabilitate, not transform haybat al-dawla. The Muslim Brothers have never looked kindly upon grassroots popular protests that they don’t organize. One of the first things Morsi did as president was to appoint a Mubarakist police chief to crack down on street protests. When protesters lobbed Molotov cocktails at Ittehadeyya Palace in February, Ikhwan leaders huffed and puffed about how this hurts state prestige.

The Muslim Brothers’ biggest miscalculation was to assume that they could join the ruling caste and begin to wield the doctrine of state prestige. Morsi worked very hard to court and appease the Mubarakist security state and its business cronies, but he realized far too late that these pillars of the old elite would never accept him and his confreres into the ruling coalition.

And it wasn’t just the Mubarakist elite that rejected Morsi. What’s remarkable is how the statist idea took hold among commentators on the left, right and center. Here’s leftist journalist Khaled al-Sirgany, sounding downright martial as he warns of state collapse and says angrily that Morsi and the Muslim Brothers “don’t realize the meaning of the state and lack basic skills to lead the first centralized state in history.”

And here’s centrist and former Islamist Mustafa al-Naggar fulminating against Morsi for pursuing negotiations to release six policemen and a soldier abducted in Sinai in May, instead of armed confrontation with the captors. “What is happening? Has state standing fallen so precipitously in everyone’s eyes to a point never imagined in our worst nightmares?” Naggar then appeals to the military to “get angry,” to go ahead and attack the hijackers and release the captives.

And then of course there’s the conservative Amr al-Shobaki, dean of Egyptian statists. After Morsi’s ouster, he opined that the reason Morsi failed is that the Muslim Brothers “have a deep hatred of the state and all its institutions because throughout their history, the Brothers have had their own organization and perhaps their own “parallel state.” So it’s not incumbent state elites that have consistently excluded the Ikhwan, it’s the Ikhwan who’ve excluded themselves.

Given the depth of the statist conviction among ostensible independents, it’s hard to escape the conclusion that Morsi was maligned not so much for what he did, but for who he is. Defenders of order and lovers of the state cannot abide an outsider president, even a conservative one like Morsi who did everything he could to join, not replace, the ruling caste.

A Militarized Restoration
In the end, haybat al-dawla is a fancy term to dress up and mystify minority control of the state. Stripped of its grandiose aura, “state prestige” is a byword for exclusion, for walling off the state from regular citizens and their revolutionary demands for state accountability, protection, and public services. Like an exclusive club on well-tended grounds, the Egyptian state and its military controllers do not allow public access. If the Muslim Brothers were so violently cast out, despite their polite deference to the ruling elite, then the message is: the state is off limits to everyone. 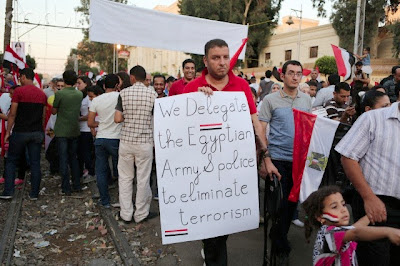 To me this is one of the most sobering lessons of the aborted Morsi presidency. The popularly-supported coup is quite a triumph for the Mubarakist ruling caste and the doctrine that the state is theirs to run. They can lay on thick the rhetoric of haybat al-dawla and restoring state standing, but what’s really been restored and re-legitimated is their complete control of the state.

Since the military leads the ruling caste, and sets the agenda and talking points for their civilian subordinates, political conflict is now cast as military conflict. Look no further than the military ruler’s discourse portraying resistance to his putsch as a battle between patriots and enemies. Oppositional sit-ins are threats to national security. Participants in the sit-ins are duped simpletons or paid agents. Their leaders are terrorists and killers. And any opposition to the military’s road map is a threat to state standing.


The challenges confronting the revolutionary project couldn’t be more daunting. It not only faces a reconstituted, militarized anti-revolutionary order, but a wicked ideology that naturalizes that order as a matter of state standing. State standing boils down to the prestige of the state’s hard core, military and police. And the revolution’s great promise of endowing citizens with full political standing is in abeyance.
Posted by Baheyya