These are no ordinary presidential elections that we’re about to experience in two weeks, and not just because they’re the first real competition for the top job. They’re extraordinary because they’re being held in the shadow of an American-backed military junta. So instead of delving into exciting, substantive debates about the presidential candidates’ comparative strengths and weaknesses, or bickering over their relative electoral fortunes, we first have to deal with the higher-order problem of presidential elections under military rule.

Like any stubborn oligarchy, SCAF and their foreign patrons won’t simply step aside and allow an elected president to exercise real power. I think their game plan is to preside over a new and improved form of elite rule where the president and parliament are popularly elected with great fanfare, but SCAF retains power over three reserved domains: foreign policy, economic policy, and domestic policing.

It’s a grim prognosis, but it doesn’t warrant defeatism, or the lazy assumption that SCAF pulls all the strings and we’re all hapless bit players in a dirty Machiavellian game. Instead, this is the latest and perhaps most exciting chapter in Egypt’s revolutionary drama, the struggle to replace rule by the few with rule by the many.

The Big Fight between Oligarchy and Democracy

Since February 11, 2011, every corner of Egypt has been locked in a power struggle between bottom-up self rule and the attempt to re-impose oligarchic control. In every government department, university faculty, shop floor, and far-flung governorate, the forces of the ancien regime have been desperately trying to reimpose old hierarchies. In some sites, the revolution has won and in others the counter-revolution reigns supreme.

Control over parliament is testament to this mixed picture. The people delivered a resounding defeat to the noxious feloul, replacing them with more broadly representative, new social forces that were locked out of parliament for decades. But the majority Ikhwan and Salafi deputies poured icy water on revolutionary aspirations, opting for a moderate approach rather than building creative links with extra-parliamentary groups.

Then again, that isn’t so surprising since parliaments aren’t hospitable places for revolutionary politics, especially if they operate under the watchful eyes of greedy juntas (and if the parliamentary leadership shares the oligarchic worldview of the military overlords).

For SCAF and its American enablers, the fifteen months since the uprising have been an object lesson in the dangers of democracy. In every crucial domain, revolutionary action threatens sacred hierarchies. Relations with Egypt’s two regional allies experienced their greatest turbulence in decades when the people stormed the Israeli embassy, eventually forcing it to relocate, and surrounded the Saudi embassy, prompting its ambassador to leave in a huff. In the economic domain, the people have had the temerity to weigh in on matters of high state policy, under the subversive notion that “individuals should be involved in how the country is run,” as the great Wael Khalil put it.

As for the vast policing apparatus that ruled the population for 30 years, the people have simply refused to let it reconstruct itself again. After its initial devastating defeat on January 28, 2011 and citizens’ storming of State Security headquarters in March, the policing apparatus has been out of order. The SCAF now resorts to military police and the arming of plainclothed muscle boys to kill and maim peaceful protestors, and has so far evaded popular demands for civilian control over the police force.

If the SCAF continues to rule directly, it risks a very dangerous escalation of these cascading popular invasions of all its reserved domains. The Abbassiyya demonstration and sit-in outside the Ministry of Defense is simply the tangible physical embodiment of this unstoppable popular encroachment.

The presidential elections are thus a life raft, enabling the SCAF to take all the credit for organizing a free and fair poll. They can then let the elected president be the fall guy, and quietly wall off their key policy domains from further democratic meddling.

This wouldn’t be the first time that oligarchy retains the levers of power under a veneer of democracy. Authoritarians have always found ways to limit the power of elected institutions, not by the crude methods of election rigging alone but the trickier means of removing certain policy areas from their jurisdiction.

Who’s up to the Challenge? 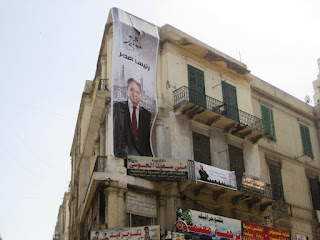 But it’s not a stable formula. Even if the SCAF and their American friends get their best-case scenario and an anti-revolution man fills the office, problems abound. This “wise” president will be left to deal with a messy country and its rambunctious people, while SCAF gets full control over the sacred policy trio: foreign affairs, key economic decisions, and the domestic security sector. But does anyone really believe that the wise man will pacify a populace that now knows its own strength?

If a popularly-chosen renegade captures the most powerful state institution, then a real struggle for power will begin. An outsider president will be a huge headache for the oligarchs, because he won’t accept sitting duck status. He may get it into his head to whip up popular support, purge the bureaucracy, forge an alliance with parliament, and use this as a launching pad for a big fight with SCAF over democratic control of the three policy domains.

The conditions are there for such a confrontation. Not only is the public fed up with SCAF’s repeated killing of peaceful protestors, but there’s growing public awareness that the generals fancy themselves a caste of mandarins standing above the state. They themselves like to remind us of this periodically, while simultaneously using a paternalist-nationalist rhetoric that they’re selfless guardians of the republic. But thanks to the vigilance of citizen watchdogs, we have a very good understanding of how they hoard public resources for their exclusive gain.

A revolutionary president thus won’t have to convince the public that SCAF is a bunch of shady characters. He just has to create the conditions for a viable, sustained confrontation, working against the military myth-making machine that attempts to invoke sanctity around a caste of kleptocrats.

The wise man’s campaign ad says “we’re up to the challenge,” but the only challenge he faces is getting Egyptians to believe his preposterous sales pitch. There are only two candidates up to the real challenge of wresting executive power from the generals and subjecting them to public accountability. I love the fact that they both started their political careers on the same day in the same room (February 2, 1977), by standing up to a dictator. 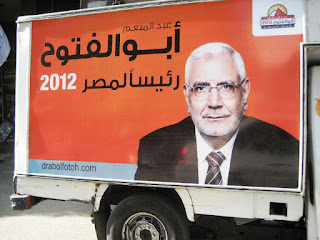 I should add that neither Abdel Moneim Aboul Fotouh nor Hamdeen Sabahy are naïve radicals who will go after SCAF from day one. I think they’re very fine politicians and real leaders who will know how and when to pick their battles; what to prioritize; how to seize opportunities; and how to learn from mistakes. We have no precedent for a democratically-elected pro-revolution president, but I think either of them is a very good start, with Aboul Fotouh possessing greater chances of winning than Sabahy.

Even if the new Egyptian presidency ends up being a hamstrung institution, popularly-elected but unable to do much, it’s remarkable that these elections do offer a choice between real alternatives. The alternatives aren’t religious rule and “modernity,” as the wise man would have it, but reconstructed authoritarian rule versus rule by the people. 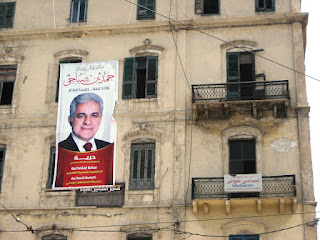 The first option is represented by a middling insider trying to sell himself as an exceptional statesman, and the second is embodied in two talented outsiders propelled by the hopes of millions of people for a fairer, more democratic society. Each alternative has a substantial group of adherents on the ground, neither of which can be dismissed.

There is a third option: the Muslim Brothers. They’re neither consummate insiders nor total outsiders, occupying a hazy middle ground all their own from which they’re mulling their next move on how to become the new insiders.

At a slightly more abstract level, the presidential elections are a fight between two rival doctrines: the age-old and still-powerful doctrine of contempt for and fear of the demos, and the insurgent idea that Egyptians have the right and the capacity to rule themselves, without elite trusteeship, military guardianship, or foreign domination.